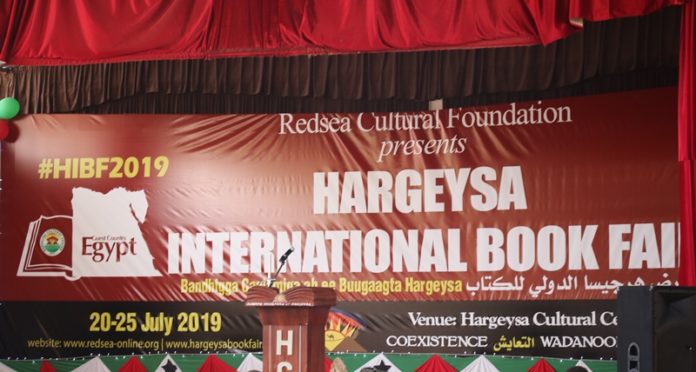 Today I was prepared to make an interesting speech at Hargeisa international book fare but no one was given the opportunity except the officials.

The below would have been a speech that I prepared to talk about the study I had carried out out on last Somaliland presidential election in 2017. I felt my study should be in the GUINNESS BOOK of Records of Somaliland, if it had got one.

First of all, I would like to take this opportunity to thank the Somaliland cultural Association for organising this huge national interest event of book fair not only running this year but a twelve year in a row. I would also thank to honourable guests for participating in this event, including government officials, international INGOs working in Somaliland and other INGOs who support Somaliland democratisation like progressio. Equally, I thank the talents who have contributed to this book fare by producing a wide range of books on diverse subjects.

I am lucky to be part of these writers who are exhibiting their achievements at this event for advancement of knowledge. I am participating in this event about a study that I and group volunteers carried out in the country in 2017. The aim of the study was to contribute to the success of elections and democratisation the country has embarked on in a positive light and send a good outlook to international community about what Somaliland has achieved. Not only in Somaliland but many developing countries elections are challenge. It is a process that requires huge resources of both social and capital commitments and more importantly necessitating public engagement and participation.

In Somaliland and any developing country despite of giving all these efforts in elections, it happens a losing party not to accept what was fair and free election with no valid evidence to support their claim. Equally a ruling party is not also prone to be accused to rig elections – However, some developing world are accused that their elections were not in conformity with international standards, including Somaliland’s immediate neighbors but Somaliland elections are evidenced to have been in very high standard albeit there were scopes for improvements.

Our ambitious study with no mainstream funding, it was about understanding how the people of the country were going to vote for the last presidential election in 2017. It was carried not only in big cities but every electoral district in every region both rural and urban to predict what would have been the election result in scientific study the presidential candidate that was to have been expected to win. Our prediction was released on the 8th of November 2017 before the election took place on the 13 November 2017. We did not only find that the current president would win by 57.7 which was 99 matched the official result released by the Somaliland Electoral Commission on 23rd November 2017 but also, we correctly tallied what was the turnout in every region. It was an impressive result. Our study was very successfully, and it was the first time ever a scientific study was carried out in the country on a presidential election (I felt I should be in the genes record of the Somaliland, if it has got one).

This study sends a positive message to the political parties and their supporters about the last presidential election. It also improves public perception of a democratic system. It is a useful resource for the electoral commission to learn from the study. It highlights both their weaknesses and strength. The public-owned their responsibility to vote peaceful way in which international election observes acknowledged. People understand the importance of the voting as they correlate stability of the country and want to see the perpetuation of power to be exchanged by ballot box but not through violent means.

The study, it is going to be tool for all political parties to understand more about voters as there seems to be lack of interconnectedness between voters and political parties. Because there is not sufficient information being provided in writing to the society to make the right decision when voting. The public are getting wrong message and it happened in the last election as the fast majority of people voted along tribal lines. Promoting events likes this, it encourages society to understand the importance of knowledge rather than relaying what has been orally said that has no evidence.

Finally, I would like people who want to achieve something that contributes to the society in anyway to be supported and producing books are successful pathways in which enables knowledge to flourish. If these books are not shown interest by the people today’s talents and future ones will be lost forever. However, this will not be case because Somaliland people are grateful to people who contribute to the society