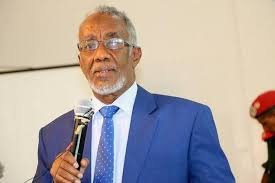 The government of the Republic of Somaliland has announced that it won’t expel the Djibouti ambassador to Somaliland.

Hon Yassin Hagi Mahmud Xiir “Faratoon”, minister of foreign affairs and international cooperation speaking to Gesska Afika on the relations between the two countries began by the responding to queries on the recent heated exchanges in the media by Hon Feisal Ali and the Djiboutian ambassador in which he said, “As far I know, the government of Somaliland has to date not received any official complaints from both sides either the opposition leader nether the Djiboutian emissary.

The FM when asked whether the government would expel the Djiboutian emissary after complaints by the opposition and the public, he said, “Everybody heard what Hon Feisal Ali Waraabe said and as of the Djiboutian envoy, he hasn’t done anything wrong thence no reason for us expel him from the country and we don’t plan to do so. We should stop the badmouthing and malice and stop misleading the people and exaggerating on petty issues.

Hon Yassin Hagi Mahmud Xiir “Faratoon responding to the allegations regarding Djibouti’s plot to undermine Somaliland sovereignty, he said, “First of all Djibouti is our neighbor, a brotherly nation, we share the same religion, culture, language and shared common interests such as trade security and bilateral cooperation but we also share a long history of friendship and which we will continue to strengthen thus why Djibouti is not our enemy.