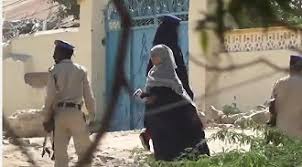 Somaliland government on Wednesday executed six people by firing squad after being convicted of murdering other people.

According to a statement issued by the office of the persecutor general has stated the executed people and the crimes that they were convicted of.

In accordance with the order from the high court in Somaliland that the government of Somaliland has carried out execution to the following criminals for the crimes that they convicted of at around 7:45 am

According to witnesses the six were tied to poles outside a notorious Mandera military prison before masked soldiers randomly shot them to death.

Somaliland  earlier executions had drawn condemnations by the international community.

The European Union warned that the summary executions in the region serve as a setback in the progress made in spreading the rule of law in Somaliland.