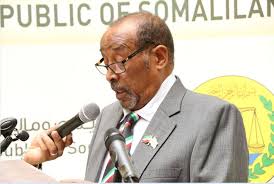 HARGEISA– Ex-president of Somaliland His Excellency, Ahmed Mohamed Mohamoud alias “Silanyo” has returned to the country on Sunday. The former leader has been greeted at Egal airport by former gov’t officials who served under his administration. The objective behind Silanyo’s hasty return to the country is that the former Head of State is due to attend the central council gathering of Somaliland’s ruling Kulmiye party which is due to take place in Borama. The former president is expected to hold talks with the incumbent leader of Somaliland, Hon. Musa Bihi shortly as the two will discuss agendas on the central council meeting. Mr. Silanyo is the founding father of Unity, Peace and Development party-Kulmiye  which has been governing Somaliland since 2010 after the former president who was running under the ticket of change unseated the former sitting leader, Riyale from power in a democratic elections. Mr. Silanyo has lived in the UAE since transferring the power to his successor in later 2017.