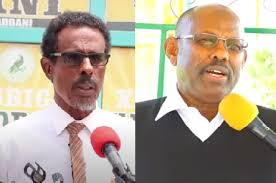 The Wadani party’s development secretary was informed by the Criminal Investigation Department (CID) that there is a summon against him lodged by the minister of livestock development, Saed Sulub, in which he needs to respond and to be held responsible for its consequences in a media briefing held on Thursday shortly after the secretary has paid a visit to the CID headquarters in Hargeisa.

Dr. Shukri confirmed for the local reporters that this summon was lodged against him by the livestock minister.

According to Wadani party secretary, the minister was extremely dismayed by the fierce critics and the constructive comments made by him against the livestock ministry development of Somaliland.

Dr. Shukri said: “The only reason which the flag of this national party is waving across the country is because we have the right to speak out strongly against any wrong doings made by the gov’t. This party cannot be silenced by a leader, a minister, or the CID. The CID & the police forces are not here to prosecute people but they are servicemen and they have the right to be collaborated whenever they request questions concerning us.”

This is not the first time for the record whereby the officials of Somaliland government have lodged summons against opposition officials.