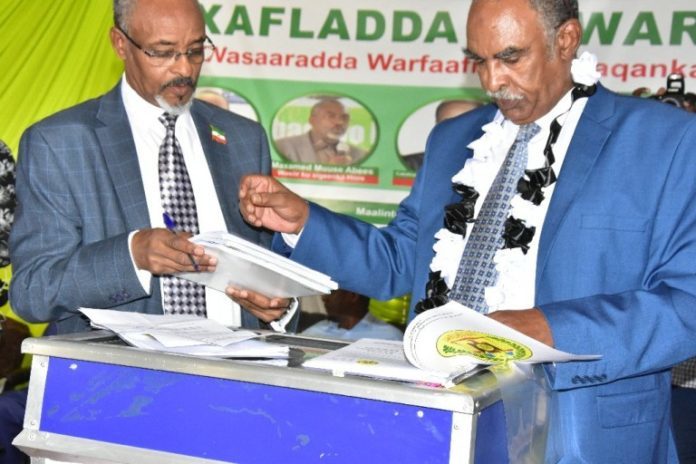 Minister, deputy and DG assume office in one unprecedented fashion

Veteran cabinet members Hon. Mohammed Musa Dirie Wa’ais took over the mantle of the national spokesperson-ship yesterday following his promotional transfer from interior ministry where he was the deputy in-charge of security, to the Information, Culture and National Guidance.

The new minister at information who happens to be the founding director general of the national public television, the SLNTV, succeeded his predecessor Abdirahman Abdillahi Farah Guribarwaqo in an unprecedented scenario which saw the three top presidential appointees take over in one smooth fashion at a go.

The new minister noted that he was not new in the media industry hence reminded the audience the long spell he steered the SLNTV since its inception.

He pointed out that he had ample knowledge on the workings of the ministry.

Indeed his past experience at the public television was exemplary.

Hon. Abdinasir who was transferred from the health ministry to occupy similar position pledged that their administration would be one governed by diligence and just sincerity of equality and justice.

The new DG pondered on the importance of the ministry as the fourth estate and its role in a nation.

On the other hand the immediate past minister reflected on the efforts he had put in the ministry while  pin pointing the achievements attained.

Packed to capacity by hundreds of ministerial staff and scores of guests, the occasion was graced by members of the cabinet and eminent personalities such as poets etc.

Veteran journalist Abdillahi  Wayab spoke on behalf of the ministry’s employees while celebrated media personality Mohammed Ali Weji who happens to be the SLNTV head and was the acting DG also stood at the dais welcoming the new officials.