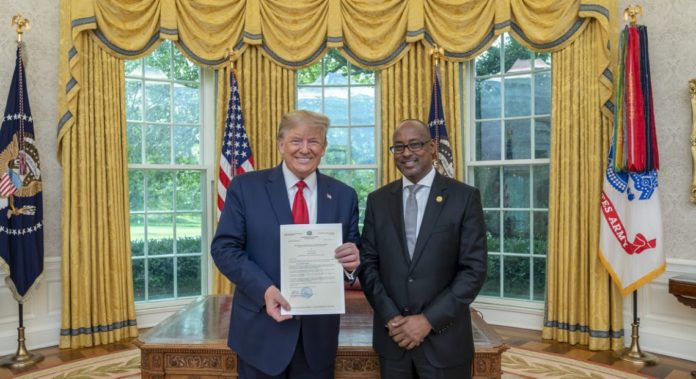 Somalia warmly welcomes President Donald J Trump’s acceptance of credentials from Somalia’s new ambassador to Washington Ambassador Ali Sharif Ahmed who presented his credentials at the White House to the president of United States of America and is mandated to build on the strong historical bonds of friendship, strategic cooperation and partnership for progress to advance the mutual benefit of both countries.

The people and Government of the Federal Republic of Somalia consider America a strong ally and partner for Somalia’s development and progress.

Ambassador Ali Sharif previously served as the Somali Ambassador to Ethiopia and France respectively. He also served as the Permanent Representative of Somalia to the African Union and UNECA.

In addition to his public sector experience, Ambassador Ahmed worked as a business executive, entrepreneur and consultant for firms with global operations. Ambassador Ahmed holds a master’s degree in Geopolitics and Grand Strategy from the University of Sussex and bachelor’s degree in Peace and Conflict Studies from London Metropolitan University.

The Somali government is confident that H.E Ambassador Ali Sharif Ahmed will fulfil his duties to build on our two countries’ historic relations with modern opportunities that benefit both sides.