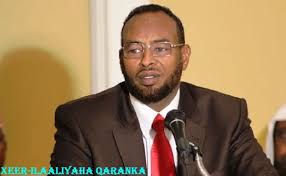 MOGADISHU– Somalia’s Attorney General, Hon. Ahmed Ali Dahir flanked by the National Auditor held a press conference in Mogadishu Saturday has leveled corruption allegations over the deputy foreign affairs minister, Hon. Mukhtar Mahad Da’ud. The Attorney General said that an investigation launched into the deputy minister’s office for the last four months disclosed that the minister has misappropriated public assets, power abuse, and misusing the financial assets of the nation. Hon. Ahmed said that the minister will be sued in the regional court so as to bring him under a trail. Security forces with an arrest warrant from a court went to the foreign affairs ministry’s compound in order to put the deputy minister behind bars but security guards of the minister have refused to allow the official to be arrested.The Prime Minister of Somalia, Ali Khaire has intervened the row between the two forces who were on the brink of clashing.