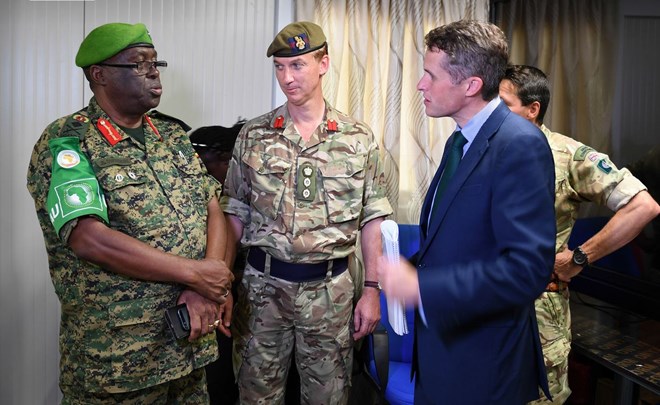 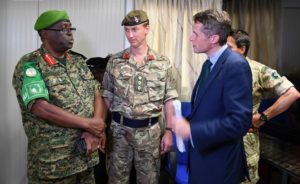 UK State Secretary for Defence Rt. Hon. Gavin Williamson has lauded the progress made on the security front in Somalia, but cautioned that the premature exit of the AU troops from the Horn of Africa country, could have an adverse effect on gains already made.

The Defence Secretary said the UK government was keen to ensure the exit of AMISOM from Somalia is not undertaken, until the latter is fully capable of handling the national security responsibility.

“The role they play is one that has sometimes been a little bit forgotten around the world, but it should be something that should be highlighted and should be celebrated; because without the decisive action that has been undertaken, without the work that they have been doing to deliver security, Somalia would be in a very difficult place,” the Defence Secretary said shortly after meeting with the AMISOM Force Commander Lt. General Jim Beesigye Owoyesigire, the Deputy Head of AMISOM Mr. Simon Mulongo  and other senior AMISOM officials, at the Force Headquarters in the capital Mogadishu, on Tuesday.

“We discussed a number of issues, particularly the ongoing support that they give to the African Union and AMISOM, the Transition Plan implementation, the activities that we are trying to scale up in Somalia; and also, we discussed the new (UN) resolution. AMISOM has certain tasks to undertake in the fulfilment of its mandate,” Mulongo explained.

The minister, who was making his first official visit to Somalia expressed the UK government’s commitment to furthering support to the Somali National Security Forces through capacity building.

“What we need to do is make sure that the Somali government has the necessary capabilities and resources, to be able to deliver security within its own borders,” he noted.

The Rt. Hon. Williamson also visited the AMISOM Intelligence, Surveillance and Reconnaissance Cell, where he interacted with the AU and Somali facilitators on issues of child protection, gender and conflict related sexual violence.

He commended the “extensive cooperation” among diverse stakeholders, that is enabling the reconstruction of Somalia.

“Coming here to Somalia, for the first time, has made a huge impression on me,” he noted.  “It’s been great to see the close working relationship we have with AMISOM and so many different nations from right around the globe. What has struck me are the real opportunities that Somalia presents.”

The UK government through the United Kingdom Mission Support Team (UKMST), is supporting the AU Mission in diverse ways and has bolstered training support to the troops and their counterparts in the Somali security forces in Mogadishu and in the federal states.