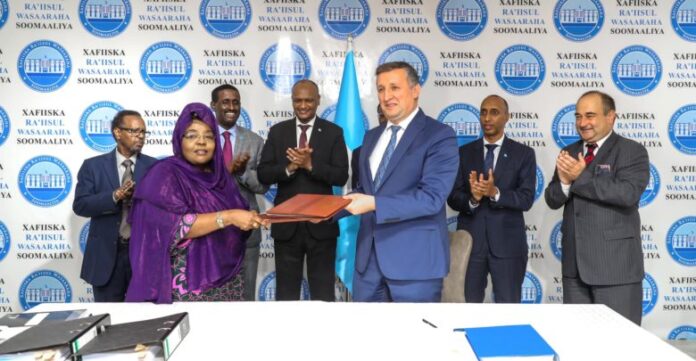 The new concession is a revision of the 2013 deal which granted Albayrak 20 years operation of the port of Mogadishu.

Somali government and the Turkish ports operator Albayrak have signed a long-negotiated deal granting the Turkish firm a new 14-year concession which also seeks to revise the revenue sharing formula between the two parties.

In the new concession signed by Ports Minister Mariam Jama and Albayrak, the Turkish firm will retain exclusive terminal operation and marine services at the port of Mogadishu ‘under a revised revenue share arrangement’.

A statement from the Prime Minister’s office did not however mention the share agreement. However, in the 2013 concession, the two parties entered into a 55%-45% in favour of the Federal Government. The concession was set  to last for 20 years.

The World Bank and the Financial Governance Committee chaired by Finance Minister and draws membership from the World Bank, IMF, and Central Bank among other stakeholders have variously questioned the rationale of the 2013 concession noting it was skewed in favour of the Turks. They called for a review of all government contracts and concessions.

Additionally, the new concession envisages the injection of $50 million over five years for rehabilitation and investment to upgrade the port amid increasing trade flows. The agreement also provides for ‘the implementation of a state-of-the-art terminal operating system to increase efficiency and speed at the port and increase service quality for shipping lines and cargo owners’.

The agreement, the PM’s office said also covers a planning and approval process for the long-term development of Mogadishu Port beyond the initial five years.

Finance Minister Abdirahman Beileh said the negotiations which took up to three years will now safeguard government income from the port. “With the new Concession Agreement, we have been able to do this, safeguarding Government income today and expanding in future.”