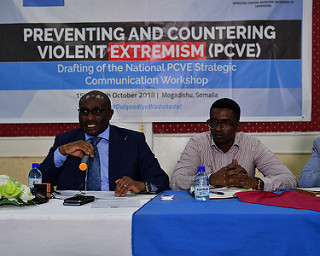 Mogadishu, 17 October 2018 – Somalia is in the process of developing a national communication strategy, to stem the tide in radicalization and violent extremism in the Horn of Africa country.

The process of developing the strategy is being spearheaded by the Office of the Prime Minister and is expected to be completed this October.

The AU Mission in Somalia (AMISOM)’s Protection, Human Rights and Gender Unit, is providing technical support to the Federal Government, to develop a suitable document, that captures the thrust of counter-extremism efforts; and ways of tackling the problem.

The first phase of meetings to brainstorm on the strategy ended in the capital Mogadishu on Wednesday, after fruitful deliberations between the Federal Government and key stakeholders.

“The strategy should be forward looking, visionary and also have clear, sustainable activities that will be undertaken,” said the deputy Special Representative of the Chairperson of the African Union Commission (DSRCC), for Somalia, Mr. Simon Mulongo, during the official opening of the three-day meeting last Monday.

The deputy Head of AMISOM urged participants to develop a workable strategy, that will encourage coordination between the federal and state governments.

“The strategy is an opportunity for Somalia to reconsider its approach to resolving conflicts and violence through use of effective communication,” he noted.

The strategy is expected to give rise to projects and programs which will involve the youth, women, elders and leaders, at various levels. Mr. Mulongo urged participants to place emphasis on the root causes of violent extremism, while seeking ways to reduce the threat.

The deputy Director of the Prevention and Countering Violent Extremism (PCVE) Unit, in the Office of the Prime Minister, Mr. Koshin Abdi Hosh, said deliberations on the strategy was critical in providing a platform for the youth and other key stakeholders to share ideas and perspectives on radicalization and violent extremism.

“We need a strategic communication for PCVE more than ever, to tackle violent extremism. This will help us develop a counter narrative to violent extremist ideas,” Hosh said.

The process moves to Nairobi, where experts from various countries will input into the draft document, draw parallels with other countries, which have similar experiences with Somalia.