Somalia’s President Hassan Sheikh Mohamud is scheduled to meet his Ugandan counterpart Yoweri Museveni this week during his first visit to the East African country since his re-election in May.

Uganda, a troop contributing country for the African Union mission in Somalia, is seen as a vital partner for the Somali government, which has been struggling for decades to restore peace following the collapse of the Horn of Africa country’s central government.

Mohamud and Museveni, who has long been threatening that he would withdraw his troops from Somalia if setbacks in efforts aimed at ending Al-Shabaab insurgency continue due to frequent power struggles between Somali officials, will discuss enhancing cooperation.

The President is also expected to meet with Somali diaspora community in Kampala, according to Shabelle TV.

Uganda will be the eighth country Mohamud visits in just two months. He earlier traveled to Turkey, Eritrea, Kenya, Tanzania and other countries as part of his quest for continued foreign assistance to help his government stand on its feed. 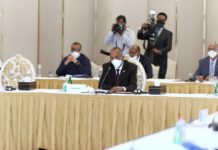 The President of the Republic of Somaliland addresses at consultation Summit on Relations between Somaliland and Somalia. 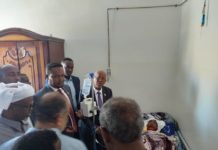