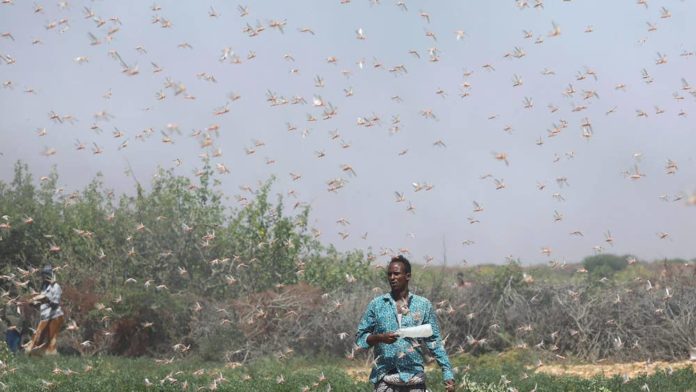 MOGADISHU–Farmers who call for more help from Somalia’s Federal Gov’t and its Int’l partners fear that the insect which crossed into the country from Yemen via the Red Sea could have wreck havoc on their harvest.
Swarms of locust covered in the sky of agricultural town of Beletwein on Sunday and Monday on its way from Galmudug state where it caused havoc last week.
The insects have destroyed crops and pasture for farmers in Adado and its environs.
According to the UN Food & Agriculture Organization, FAO, the locusts have already damaged about 700, 000 hectares of land in Somalia and neighboring Ethiopia threatening food supplies in both countries and the livelihood of both communities.
Conflict and chaos in large parts of Somalia makes spraying very difficult which FAO called the ideal control measure.
FAO says in the next six months more 100, 000 hectares of land will need direct control intervention in Somalia noting the UN agency now require 3 million for the initial response.
So far FAO has conducted surveys covering of 20 hectares of land in Puntland and Somalia and have also trained the gov’t officers in the application of pesticides in Somaliland.
FAO noted due to security concerns aerial sparing won’t be possible that slowing down the response mechanism.