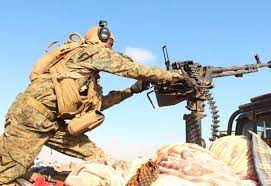 A ceasefire brokered by traditional leaders won’t hold after fighting resumed in the port city of Bosaso on Wednesday night, hours after it saw calm and calls for peaceful concessions over the bone of contention in the town.

Videos circulated showed stray mortar bombs that hit civilian homes. Some of the residents were asleep as mortar shells crashed through their roofs and fell near their beds in one of the scariest scenes of the ongoing infighting.

20 people are said to have been killed, with more than 70 other wounded.

Both authorities and PSF mutineers blamed each other for breaking the ceasefire which was agreed on Wednesday.

In a statement, mutinous security force said authorities were not keen in restoring clam and continued attacks, but Puntland government noted that it was still ready to give  a chance the mediation efforts underway led by regional leaders.

Residents who still remained in the town have begun to flee on Thursday.

A journalist described seeing wounded people across the streets of Bosaso and carcasses of livestock animals hit by stray bullets scattered around the streets.

PSF, whose commander Mohamed Osman Diano refused to hand over responsibilities after being dismissed by regional president, claimed “terrorist elements” within regional were fanning the flames of war.

However, authorities say they were committed to ensuring the supremacy of rule of law and would give time for the mutinous commander to leave his post.

In a statement, Somalia’s President Mohamed Abdullahi Farmajo said he was saddened by the loss of life, destruction of civilians property and wave of refungees unleashed by the fighting in Bosaso, calling for elders and intellectuals in the region to mediate an end to the tension. former regional presidents Abdirahman Farale and Abdiweli Gas as well as other officials called for calm and efforts to ease the military escalation.