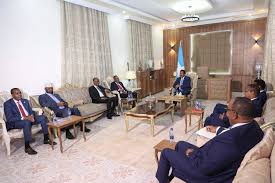 Ahmed Madobe, Jubaland state of Somalia leader has put the blame on the country’s leader Mohmed Abdilahi Farmajo for the fiasco of Dhusamareb consultative meeting.

Jubaland leader expounded that president Farmajo is keen on to conduct a unilateral election process in Gedo province which is under Jubaland.

He stressed that this is not possible for such a president to be trusted in the country.

The statement comes just after the Federal Govt of Somalia declared that Dhusamareb Consultative meeting was a total failure.

On Friday night, the Federal govt of Somalia declared for the public that they failed to reach an agreement with the Federal member states over elections whilst pointing out an accusatory finger to Jubaland leader.

There has been political wrangle between the Federal Gov’t of Somalia and Federal member states  on issues concerning on Gedo region, the electoral committee and the election date.

The term of Somalia’s government and president Farmajo will expire on 8th February.