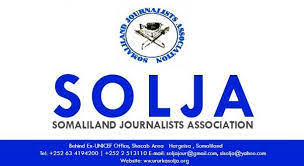 Hargeisa, 28 June 2020—The Somaliland Journalists Association (SOLJA) have a stand against the recent actions taken by the Somaliland police. On 25 and 27 June 2020, the police took over the headquarters of Star TV and Universal TV showing neither court warrant for the immediate suspension nor any other legal document that will legitimize their closure from the respective government agencies. However, in a BBC interview, the Ministry of information Saleebaan Ali Koore have alleged the Universal TV suspension due to their resistance over the president’s live speech coverage during 26 June Commemoration for independency while the Minister have declined to provide any reasons of closure for Star TV.    In a press conference, SOLJA chairman Mohamud Abdi Jama said: “We are against any form of suppression and pressure against media independence and no compromise of the media rights guaranteed by the constitution and Press law”. The chairman added that the closure of the televisions is illegal as long as the government overlook the due process of the law should be followed even if any media breaches the existing legal regulations. The chairman has also demanded to provide issued letter from the Ministry of Information for shutting-down the televisions as SOLJA and media owners where not shown still. On the other hand, SOLJA chairman has expressed the media agencies and owners have to take precautions while signing cooperative agreements with the government and not to breach afterwards. Finally, SOLJA Calls for the government to lift the heavy presence of the police in Star and Universal offices to resume their journalism activities.