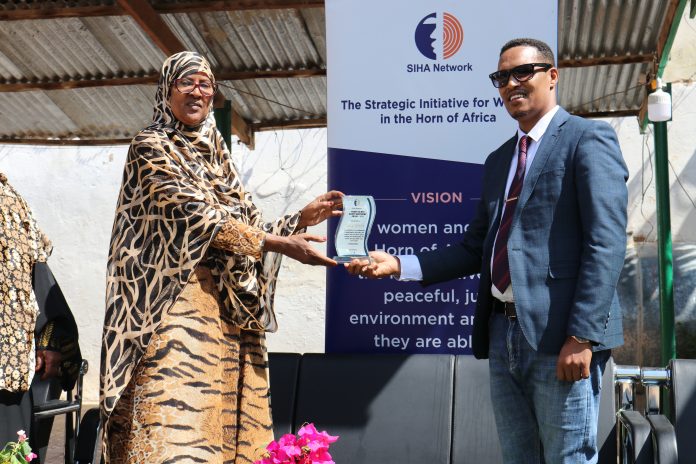 Nagaad, the Somaliland women’s Umbrella organization has been recognized as the best defender of gender based rights in the region and awarded ‘Women human rights defenders award 2020’.

This acknowledgment was made by Strategic Initiative for Women in the Horn of Africa -SIHA Network in Hargeisa where Nagaad was presented with the  award of  Women Human Rights Defender thence  the best women rights defending organization in the Horn region in the current year.

“It is a big honour to be awarded this recognition by SIHA Network” said the  Chairperson of Nagaad, Ismahan Abdisalam Hassan during the award ceremony

Established in 1995 by a coalition of women’s rights activists with the aim of strengthening the capacities of women’s rights organizations and addressing women’s subordination and violence against women and girls in the Horn of Africa, SIHA has grown substantially and is now comprised of 136 member organizations.

Nagaad’s award was presented by the SIHA project manager Yusuf Ahmed Abdi at a colourful function  witnessed by senior officials and members from the two organizations.

Upon congratulating the Somaliland women umbrella organisation  the SIHA Project Manager said the award was in recognition of the endeavours of Nagaad as pertains to relentless campaign for advancement of women rights in Somaliland more so it’s activities related to elimination of gender based violence, Rape and FGC as well pursuit of apt women access to decision making   positions both in politics and service.

While emphasising on the  importance the regional network  places on the ultimate achievement of  gender parity  Yusuf Ahmed Abdi went on to inform  that SIHA launched the Women’s Human Rights Defender Award for the first time this year with dual launch in  Somaliland and South Sudan.

Adding that the process leading to  recognition of Nagaad as first recipient  started in  July 2020 when partner entities  we asked to  nominate (select) the organization they think has done a good job (Defending Women’s Issues) the rights campaigner said that the results were submitted to SIHA advisory board.

“Upon  careful and impartial deliberation the awards selection committee was unanimous with  Nagaad’s achievement in having made a real difference  in Somaliland in defending women’s rights, thus my pleasure today in awarding  the first SIHA Women Rights Defender Award to Nagaad” said Yusuf Ahmed Abdi the   SIHA network project manager

Similar  sentiments were echoed by the head of the Hargeisa based  SIHA office Nuradin Muhumed Abbi, who also addressed the gathering, said, “We are very pleased to  be partners with  Nagaad an organisation whose deligence despite a myriad of cultural and political challenges has helped changed women’s rights in Somaliland.”

The Executive Director of Nagaad, Ms. Nafisa Yusuf Mohamed thanked SIHA and said, “We are very happy to have received this award from SIHA , which is includes  cash, and certificate.

Nafisa said they will continue their efforts to work for women’s rights, such as education, economic development, the fight against rape and female genital mutilation, all under the auspices of Nagaad.

In her address that culminated the function the    Chairperson of Nagaad, Ismahan Abdisalam Hassan, said she was delighted  that the 136 members of  SIHA, were unanimous in their recognition of achievements of Nagaad  then  choice of her umbrella as the first recipient of  the Strategic Initiative for Women in the Horn of Africa-SIHA Women Human Rights Defender.

The Somaliland women  NAGAAD Network  was founded in 1997 to advocate for women and children’s empowerment and to work towards achieving an egalitarian society where women, children and men are equally significant. Currently, NAGAAD  consists of  46 women’s organizations across the country. It has operational offices in all six regions, and representative in Nairobi.