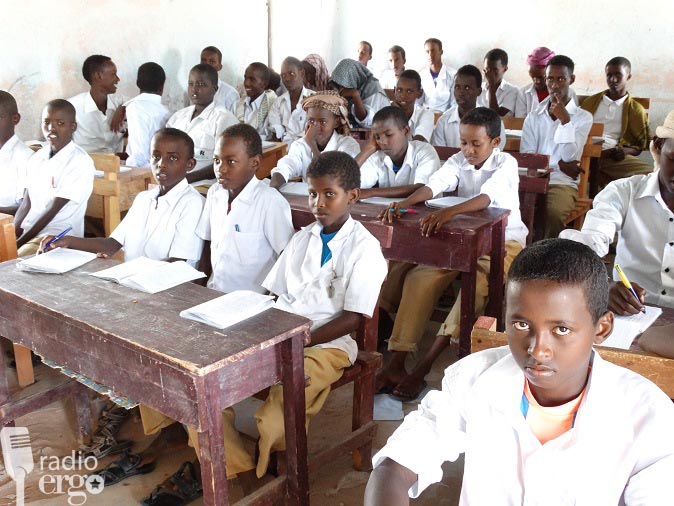 A primary school in northern Somalia’s troubled Sool region has been overwhelmed with students because of an influx of conflict-displaced families into the town.

The administration of Kalabayr School in Kalabayr town is trying to implement shift learning owing to its limited capacity.

The school had an initial population of 739 students. It has recently admitted over 500 children from IDP families arriving in the town after fleeing clan clashes in Dhumay village.

Abdikadir Jam’a Farah, the head teacher, said they cannot properly accommodate all the new students. There are more than 70 children crammed into each class, which makes teaching and learning difficult.

“The school with six classes has 1,239 pupils with almost all classrooms catering for 70 pupils each.  We have only six teachers. The school is congested! We need more classes and more teachers to confront these challenges,” he said.

According to Abdikadir, the school has been forced to turn away at least 200 more students from Dhumay village. He is trying to shoulder the burden of looking for more resources to cope.

Farah Ali Jam’a, a father of six has been struggling to get a place at school for his children since he arrived in Kalabayr.

“The problem is getting a chance at the school. Most of these children are brought by the mothers. The area is also facing a shortage of schools so all the children are being brought to this one school,” said Jama’a

Faduma Ali Ismail and her children arrived in Dharkeynin November, after fleeing clan clashes that erupted in Dhumayin August. She is concerned about the safety of her children as they are out of school and roam around all day.

“I fear for the safety of my children because since they are at home, they swim in water ponds which are not safe for them. If I could get a school to send them to that would be a relief to me,” she said.

Unlike Farah and Faduma, SahraMohamud Farah, a mother who fled from Dharkeyn, has managed to get seven of her children into the school.

“Although our neighbours and several other people did not get the chance at the school, my children were lucky enough to get admission. The administration helped to give our children free education,” she said.