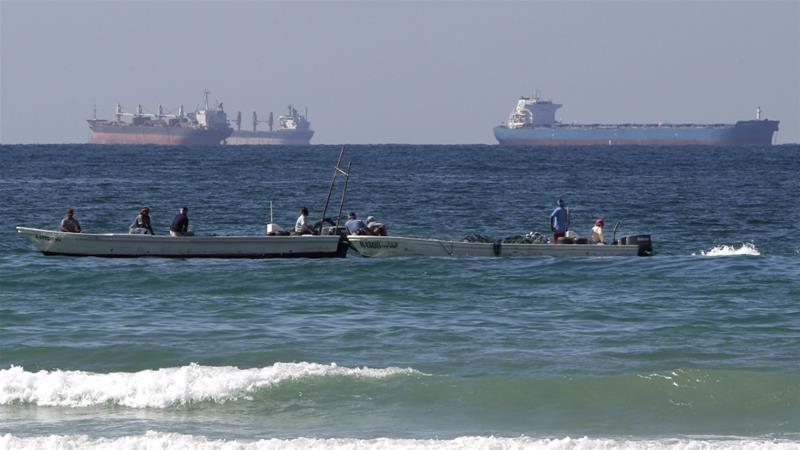 Saudi Arabia’s Energy Minister Khalid al-Falih said on Thursday the kingdom would halt all oil shipments through the strait immediately.

The suspension will last “until the situation becomes clearer and the maritime transit through Bab El-Mandeb is safe”, Falih said in a statement.

A statement by the coalition said one tanker was attacked west of Yemen’s Hodeidah port, but did not name the vessel or describe how it was hit.

“The Saudi oil tanker was subjected to slight damage due to the attack by the Houthi militia,” the statement said. “Thankfully the attack failed due to immediate intervention of the coalition’s fleet.”

A statement from Saudi Aramco said “two Very Large Crude Carriers [VLCCs], each with a two million barrels capacity … were attacked by terrorist Houthi militia this morning in the Red Sea. One of the ships sustained minimal damage. No injuries nor oil spill have been reported”.

Earlier on Wednesday, the Houthi-run Al-Masirah TV network reported rebels also targeted a warship named the Dammam off the western coast of Yemen. The rebels later said they launched a missile attack on the vessel.

On June 13, Yemeni government forces – backed by the military alliance – waged a wide-ranging operation to retake Hodeidah and its strategic seaport from the Houthis.

Government forces continued to advance towards the city and on June 19 they seized Hodeidah’s international airport. But they have since been unable to make additional gains.

Saudi Arabia and the United Arab Emirate’s main justifications for the intervention was to protect shipping routes such as the Red Sea, which is used to bring Middle Eastern oil and Asian goods to Europe through the Suez Canal. They said they foiled previous attacks in the Red Sea in April and May.

The coalition accuses the Houthis of smuggling weapons through Hodeidah’s port.

Since the start of the Hodeidah offensive, more than 121,000 people have fled the city, according to a United Nations report.

Impoverished Yemen has been wracked by violence since 2014, when the Houthis overran much of the country, including the capital Sanaa.

The conflict escalated in 2015 when Saudi Arabia and its allies – who accuse the Houthis of serving as Iranian proxies – launched a massive air campaign in Yemen aimed at rolling back rebel gains.