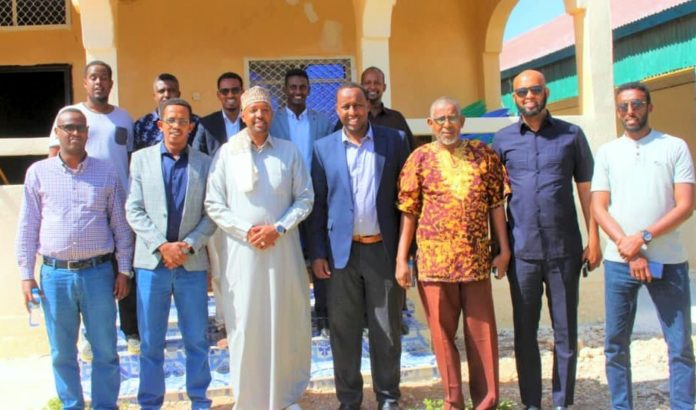 A delegation led by Omar-Sayid Abdullah Adan, the Director-General of the Ministry of Transport and Road Development Agency is on a working visit in Las Anod town, Sool region.

The director-general and his delegation in the company of the ministry of transport regional coordinator meet with the various administrative officials based in Las Anod, in Sool region.

The Director-General stated that the purpose of his visit was to enforce the Presidential Directive issued by President Muse Bihi Abdi, to restore such institutions under government control.

Mr. Shakir Mustafa, the ministry regional coordinator briefing the media said that the purpose of the delegation visit was to a review of the services provided by GTS in the manufacture of licenses and vehicle ownership books, which the Somaliland government has officially taken over from that particular company. They came to transfer and evaluate the equipment that GTS handed over to the Ministry.

Mr. Abdiaziz Hussein Taar-Wale, Mayor of Las Anod speaking during the handing over ceremony said,” The delegation has completed the transition from the privately-owned GTS, we welcome you and your team, and we will assist you whenever the need arises be it to land owned by the ministry or matters related to transportation.

Director-General of the Ministry of Transport and Roads Development Hon. Omar Sayid Abdullahi Adan thanked the administration of Sool region and Las Anod district for their warm welcome hospitality accorded to him and his delegation.

“Mayor of Las Anod, the Sool Regional Commissioner and the Sool Regional Transport Coordinator thank you for your warm welcome. In fact, Sool region is marked by growth and development, both in terms of security and governance. “Our mission has been to evaluate the materials and personnel of the GTS Company that has been working with the Ministry of Transport documents which have successfully concluded that, through other regions throughout Somaliland,” said the Director-General in the ministry of transport and road authority development.