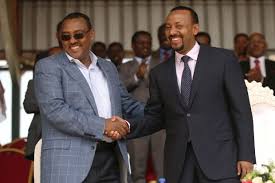 ADDIS ABABA (Reuters) – A failed regional coup in Ethiopia has exposed rare divisions in the alliance that has dominated the country for three decades, with two of the four ethnic parties that form the ruling coalition trading insults in a public feud.

While there have been disagreements among the parties in the past, analysts described the acrimonious exchange this week between the Tigray People’s Liberation Front (TPLF) and the Amhara Democratic Party (ADP) as among the most serious yet.

The new tension between them arose after a rogue militia tried to seize power last month in the northern Amhara region, ruled by the ADP. The authorities blamed the June 22 attempted regional coup on Asamnew Tsige, a rogue ADP member, killed in fighting on the outskirts of the regional capital Bahir Dar.

In recent days, the TPLF has accused the ADP of having stood by while Asamnew trained and armed a militia in the lead-up to the uprising, and of having failed to denounce him since.

“The TPLF would have difficulty working with its so-called sister party, which hasn’t even dared to stare the killer in the eye,” Getachew Reda, executive member of TPLF and former national communication minister, told Reuters on Thursday.

The ADP responded by accusing the TPLF of being “responsible for the current political crisis in the country. The TPLF has no moral or practical ground to consider itself as the only guardian of Ethiopia,” it said in a statement late on Thursday. It gave no further details.

FLYING IN THE FACE OF REALITY

The TPLF was angered earlier this week when the ADP chairman, Deputy Prime Minister Demeke Mekonnen, said an unidentified third group was behind the June uprising. The TPLF viewed the remarks as an attempt by the ADP to avert blame.

“How would I feel comfortable sitting next to Demeke while his remarks are flying in the face of reality?” TPLF’s Getachew told Reuters by telephone.

The violence on June 22 was the strongest challenge yet to the rule of Abiy, who in just over a year in power has rolled out a series of reforms allowing greater freedoms in what had long been one of Africa’s most repressive states.

The reforms have made it possible for long-held grievances against the government’s decades of harsh rule to resurface, and have emboldened local power-brokers seeking to build support by securing more power and territory for their ethnic groups.

Resulting waves of unrest have forced the government to postpone a long-delayed national census and thrown doubt over whether an election next year will be held on time.

Each of the ruling coalition’s four ethnically-based parties faces increasing competition from newer, more strident parties in their own home provinces, and are having to become more assertive themselves to avoid being outflanked, analysts say.

“It will be difficult for the ruling coalition to maintain its current status ahead of the upcoming election,” said Mulugeta Aregawi, a lecturer at the Addis Ababa University School of Law.

William Davison, an analyst from Brussels-based International Crisis Group, said that if the tension among the parties were to break up the ruling coalition, it “would leave a major power vacuum”. But he added that it still appeared unlikely for now, “since all actors have too much to lose.”