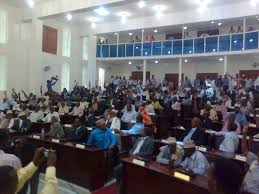 Somaliland’s Upper House of parliament (Guurti) held its session which sparked heated debates and exchange views on the relationship between the bicameral legislation.

The Upper House MP’s have said that there must be an assessment on the working ties between two chamber of the parliament and said that the action taken by the Lower House is a total breach to the laws of the national constitution.

They have called the suspension of working ties with the Upper House of parliament unless there will be by laws that will be used as stipulation in regard to the relationship between the two chambers of the parliament.

The bone of contention is that the Lower House has violated the working precedure between the two bicameral legislation alleging that the Upper House has handed over Bills amended by the Guurti but it has been approved as the bill was before the review and later the Head of State signed into Law.

The Lower House of Parliament (Representatives) is accused of passing the Rape Bill where clauses added are totally against the Islamic religion and in doing has broken the constitutional laws.

The Upper House is said to have the prerogative right to hold debates on bills passed by the Lower House and have a review and make changes to it.

The Only Bill which The House of National Assembly has the right to pass with out the submission to the House of Elders is the National Budget where they have the overall right to do so and submit it to the president for ratification into Law.

Hon. Dheeg, an MP of the Upper house has said that the Lower House must take all necessary precaution as these bills will have a profound impact on the generations to come.