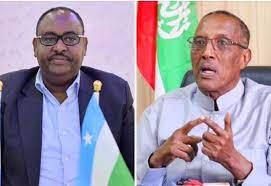 Mr. Kahin told he had spoken to his Puntland counterpart on renewed clashes between clans cohabiting in the border towns and denied claims that authorities played a role in stoking the violence, calling for a de-escalation by both warring clan militias.

At least 10 people were killed and more than 20 others wounded in the clashes that broke out in Bo’ame and Birta Dheer towns in Sool and Nugal regions on the border area between Puntland and Somaliland.

SL’s Interior Minister Mohamed Kahin Ahmed said Bo’ame is located inside SL border and authorities will work to restore clan in the area in cooperation with neighboring Puntland regional state.

SL maintains security cooperation with neighboring Puntland and will cooperate to continue to strengthen relations, he added.

Last week, Somaliland President Muse Bihi Abdi accused Somalia’s embattled leader Mohamed Abdullahi Farmajo of igniting fighting in the commercial port city of Bosaso, saying the conflict impacted territory under his administration’s control after dozens of people sustaining injuries from the infighting had been admitted to hospitals in Hargeisa.