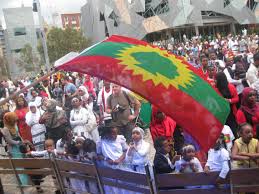 Oromo ethnic group sustain and insist to their envious actions against the other communities live in Ethiopia. This new atrocity and intrusive actions led the country to new hostile environment amongst the Ethiopian people. When the swift leader of Ethiopia Abiy Ahmed takes the power, instantly Oromo embarks to pervade a new enmity and antipathy among the community live in Ethiopia including Somali community. These ruthless and audacious actions begun to fragment the country. The other side of the coin, these haphazard and disarray situations diluted and downplays the security, which is currently fragile. Abiy, the prime minister of Ethiopia keeps silent the killings and repugnancy of Oromo against the Somali community lives in Somali region in Ethiopia.
What meets the Exploration of the Gas/Oil and the Invasion of the Ethiopian troops to the Somali region?!
Somali Kilal (State), which is the second humongous land in Ethiopia, and lives in the third largest population in Ethiopia , is currently encountering an oppress and drastic human rights violation from the Oromo fiefdom regime. At the beginning , the Ethiopian regime was trying to conceal the Oromo’s cruelty , but currently , the atrocity becomes divulge due to the continuously killing of innocent people who originates from the Somali community live in Ethiopia.
The Somali region has been found and discovered two wells of gas, fuel, petrol and oil in JEEXDIN area under SHILAABO district-Korahey region, and CUNADHEERE area between GODEY (Shabelle Region) and DHOOBAWEYN. After Cunadheere Gas was tested and becomes functional, Ethiopia begins Extracting Crude Oil in Somali Region in June this year, then the over speed prime minister of Ethiopia Abiy starts to had several meetings with the former president of the Somali region CMC in order to convince him to allocate the Somali region 5%, this wishful thinking and immature suggestion makes him annoyed the president of the Somali region, and he boycotted this humiliation allocation.