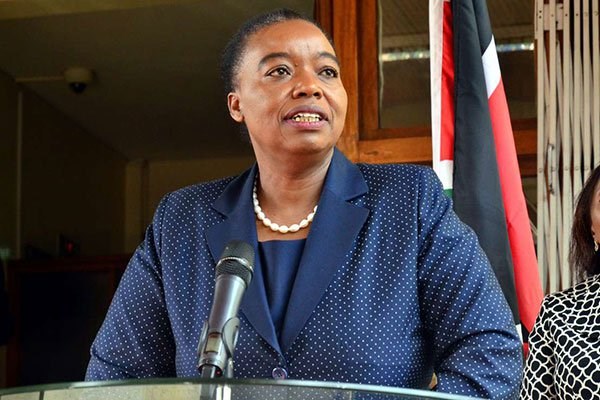 Foreign Affairs Cabinet Secretary Monica Juma addressing journalists outside her Nairobi office on May 21, 2019 on her talks with European Union’s High Representative for Foreign Affairs Federica Mogherini (not in frame). Kenya and Somalia are wrangling over territorial waters rich in hydrocarbons. PHOTO | FILE | NATION MEDIA GROUP

Kenya is flexing its diplomatic muscles in its row with Somalia, which it accuses of continuing to violate its territorial waters rich in hydrocarbons by launching investment programmes in the disputed area.

The Nation learnt that Kenya is taking measures to put pressure on Mogadishu. These include withdrawing privileges given to senior government officials, resuming stringent measures for Somali aircraft, engaging with friendly federal states, as well as tactical withdrawal of Kenyan security forces from areas they had liberated in Somalia before a transition programme is implemented.

On Tuesday, three members of the Somali delegation who had travelled to Nairobi for the launch of a European Union-sponsored cross-border conflict management programme were sent back to Mogadishu after Immigration authorities said they had no valid visas.

The three — junior minister for water and energy Osman Liban and lawmakers Ilyas Ali Hassan and Zamzam Dahir — were refused entry at the Nairobi airport for lacking visas despite holding diplomatic passports.

The officials later claimed they had been ambushed with the demand for visas, which they used to get on arrival at the airport.

Asked for comment, Foreign Affairs Cabinet Secretary Monica Juma told reporters in Nairobi that the Somali officials should have obtained visas as is required.

Although Ms Juma said she did not have a clear picture of what had happened to the officials, she indicated she “would be very surprised if anybody was turned away with a visa”.

This was just one in a series of actions taken by Nairobi to protest at Somalia’s continuing implementation of a timeline that would culminate in oil blocks being dished out to investors.

The move came as the Somali House of Representatives passed amendments to the 2008 Petroleum Act, allowing the Upper House to routinely determine a revenue-sharing formula between the national government and the six federal states.

“The Petroleum law will enable the long-term development of the country and provide the resource to establish infrastructure crucial for long-term prosperity,” said Somalia’s ministry of petroleum and mineral resources in a statement.

“With the passage of the Petroleum Law, it is anticipated that Production Sharing Agreements (PSAs) will subsequently be signed, which will enable exploration activity to then commence and hopefully lead to discoveries.”

Although the Somali ministry insisted that “no blocks in the area currently under dispute with Kenya will be part of this or future licensing rounds until settlement is reached”, the geographical location of some of the 15 blocks in question is in dispute.

Somalia sued Kenya in 2014 at the International Court of Justice seeking to redraw the sea boundary as an extension of the land border, causing the future ownership of the blocks to remain uncertain.

Yet Somalia’s programme on the 15 blocks means a potential bid date for blocks could be November 7, 2019 as the hearing of the case goes on. Nairobi sees this timeline as a violation of the need to wait for the case to be determined.

As Somalia refused to withdraw the case, Kenyan officials say Nairobi will continue with tougher measures on Mogadishu that will include freezing certain bilateral agreements.

On Monday evening, Immigration officials told the group they should have obtained visas at the Kenyan Embassy in Mogadishu before proceeding.

The three later told Somali Radio Dalsan they had been told they would have to return to Mogadishu, though some of their colleagues travelling on foreign passports had been allowed in.

“The Kenyan authorities at the airport informed these guys that such [a] plan has changed, and now everyone has to obtain a visa from Kenya’s Mission in Mogadishu,” a senior Somali official in the delegation who travelled on a foreign passport told the Nation on Monday night.