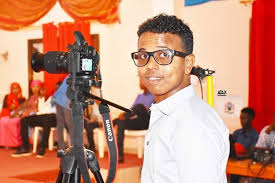 The National Union of Somali Journalists (NUSOJ) today called for safety and improvements in working conditions as a top priority for Somali journalists who are traveling with armed forces after confirmation that a journalist was among the victims of the terrorist bombings at government military base in Somalia’s Lower Shabelle region.

Journalist Abdinasir Abdulle Ga’al, a cameraman who has been working for government-controlled Radio Station of Somali National Army (SNA), was yesterday (Wednesday 14 August 2019), killed at Awdhigle district after Al-Shabaab carried out two car bomb attacks at SNA military base. Ga’al was traveling with the SNA’s command to conduct interviews with elders of Awdhigle following the liberation of SNA. Awdhigle, recently captured by SNA, is 70km southwest of Mogadishu.

The death of Abdinasir Abdulle Ga’al was last night formally announced last night after 6 bodies, including his body, were airlifted by SNA to Mogadishu and his family was notified the tragic death of the journalist who was killed by second car bomb attacking, according to SNA sources.

“This tragedy one again exemplifies how journalists who are traveling with armed forces even face unavoidable risks for gathering news and information. We mourn the loss of our colleague, Abdinasir Abdulle Ga’al, and we call for more acknowledgement of the safety risks that journalists are forced to take to carry out their professional journalistic duties,” said Omar Faruk Osman, NUSOJ Secretary General.

“Clearly, travelling with the army does not lessen the risk to journalists. Indeed, as this tragedy shows, it can put journalists directly in the firing line. We must intensify our campaign to reduce the risks that journalists face, even when we know that casualties are inescapable” added Osman.

Abdinasir Abdulle Ga’al, 24, is the 3rd journalist to be killed in Somalia in this year for bomb blasts, carried out by Al-Shabaab. Ga’al, an aspiring young journalist who received training from NUSOJ in 2018, has worked several TV stations such as HornCable TV before joining SNA radio station.