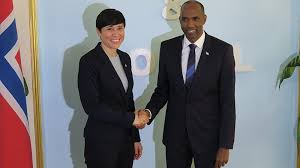 Norway carried out a loan operation on 5 March that enabled Somalia to pay off all its debt arrears to the World Bank’s International Development Association (IDA). The loan of almost USD 366 million was repaid within 5 hours. The Norwegian central bank, Norges Bank, served as payment agent. The Storting approved the loan operation on 25 February.

This short-term bridge loan to the World Bank is an important element of an extensive, internationally coordinated operation to enable cancellation of a large part of Somalia’s debt obligations under the Heavily Indebted Poor Countries (HIPC) Initiative and restoration of Somalia’s access to financial support from multilateral financial institutions such as the World Bank, the African Development Bank and the International Monetary Fund (IMF). Due to its arrears, Somalia has been unable to obtain new loans for decades.

‘This is a major collective international effort, and the loan operation went exactly as planned,’ said Ine Eriksen Søreide, Norway’s Minister of Foreign Affairs. ‘We have been preparing this bridge loan since last August in cooperation with the Ministry of Finance, Norges Bank and the World Bank. It is very important for Somalia’s continued development that the country receives much-needed debt relief.’

After several decades of civil war and the collapse of state institutions, Somalia has carried out a series of political and economic reforms in recent years. Under the current government, public financial management reform efforts have been intensified in close cooperation with the International Monetary Fund (IMF) and the World Bank. It has been a top priority of the Somali Government to meet all the standard requirements for debt relief, which is essential if the country is to achieve sustainable economic growth in the long term. The Government is also committed to carrying out a national action plan to combat poverty – in a country that is one of the poorest in the world.

Bridge loans of this type have been issued before for a small number of countries, including Liberia and Myanmar. They are necessary because the international financial institutions themselves cannot forgive debt or finance repayment of outstanding loans to themselves by issuing new loans or grants. This is the first time Norway has made such a loan available. In practice, the loan worked by redeeming all of Somalia’s debt arrears to the World Bank (IDA). The loan immediately triggered release of a grant of equal size from IDA to Somalia. With an advance guarantee by the Somali Government, these funds were used to pay off the loan from Norway. Somalia will also receive $45 million in budgetary support from the IDA on grant terms as well as access to additional IDA support in future.

‘I met Somalia’s Prime Minister, Hassan Ali Khaire, in Mogadishu last June. He has thanked Norway for standing behind Somalia. Somalia’s receipt of new concessional assistance from the World Bank, which was triggered by the Norwegian bridge loan, is a very positive development,’ said Ms Eriksen Søreide.

‘The World Bank is one of our most important partners in the pursuit of sustainable development and poverty reduction,’ said Minister of International Development Dag-Inge Ulstein. ‘Almost seven in 10 Somalis live below the poverty line. With the Somali Government now delivering on its economic reforms, it is very important that all of us who wish the country well are supportive. In exchange, we expect the authorities to increase investments in health, education and social services in a way that benefits the entire population of Somalia.’

In the spring of 2020 Somalia is also expected to receive extensive relief on its state-to-state debt. Somalia’s total foreign debt stands at about USD 5.6 billion, of which about 60 per cent is bilateral.