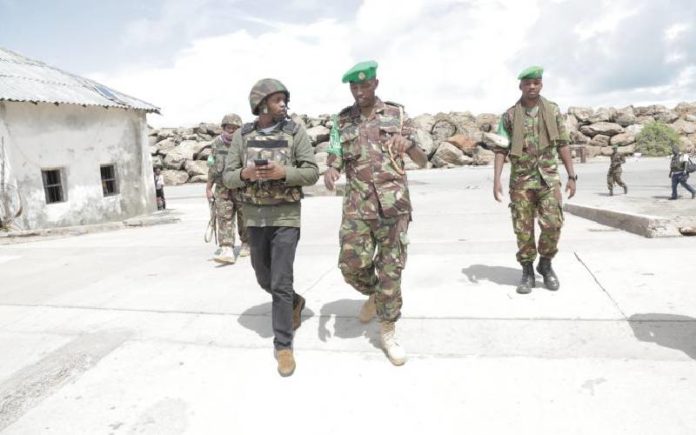 A top military commander has said that a maritime border dispute has not affected operations of Kenyan forces in Somalia.

Lieutenant Colonel Meshack  Kishoyian, Commanding Officer Two Mechanised Infantry Battalion based in Kismayo said the relationship between the two countries remained cordial.Lt Kishoyian said he was not aware of any specific exit plan for Kenyan troops and that they would continue building Somalia’s security capacity.The Kenyan troops are operating under African Union Mission in Somalia (AMISOM).The two countries have recently been engaged in a diplomatic tiff over a maritime boundary dispute following the reported auction of oil blocks by Somalia in the contested area.“I have not seen any standoff whatsoever, we work cordially with Somali security forces and other AMISOM forces,” he said.“KDF forms part of AMISOM, the military is straightforward, we are guided by our mandate and we have a mission which we are currently implementing in Sector Six, issues of politics will be handled at the level of politics,” he said.

“Our mandate here is to establish and maintain a safe and secure environment within which the Somali people can rebuild their lives and prosper,”he said.

“We are currently mentoring the Somali security national forces through joint operations so that they can build their capacity to take over and maintain a safe and secure environment  that currently exists in Kismayo once AMISOM departs,” said Kishoyian.Regarding exit rumours of Kenyan troops pulling out of Somalia, Kishoyian said military operations were fluid in nature and that it was difficult to pinpoint the exact exit date.

“Ultimately it is the Somali forces who will be in charge of pacifying and ensuring that their country is safe and secure when AMISOM exits.

We’ve been able to mentor them by conducting joint operations to ensure that they are professional and capable of securing not only Kismayo but ultimately the whole of Somalia,” he said.He said that there were challenges as Somalia had been at war for a long time  before the entry of Kenyan forces.

“Military operations are fluid, you cannot put a specific date of a pullout. However, the concept of operations spanning from 2018-2021 gives a breakdown of the mentorship to be given to the Somali national security forces an gradual withdrawal so that we don’t destabilise the area,” he said.In 2012, KDF along with Somali forces liberated Kismayo and its environs from the Al-Shabaab.