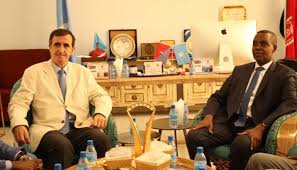 The meeting was aimed at accelerating the implementation of city development projects undertaken by the EU.

After the meeting, the mayor of Mogadishu Mr. Omar Filish and the EU envoy to Somalia jointly launched the Saanqaad project, a project which is aimed at promoting business in the capital.

Saanqaad project is intended to support young entrepreneurs of small and medium sized businesses in the Somali capital Mogadishu.

The EU envoy to Somalia Berlanga commended the efforts of Banadir government to support youth which he said is the largest section of the population.

Mr. Berlanga revealed that peace in Mogadishu is coming back to normal and that means Somalia is recovering the instability and suffering.

The mayor of Mogadishu Omar Filish said this project is funded by the EU and implemented by the UNDP.

Mr. Filish added that Saanqaad project will be implemented in some parts of Hamarweyn market which was destroyed in Somalia’s civil war.