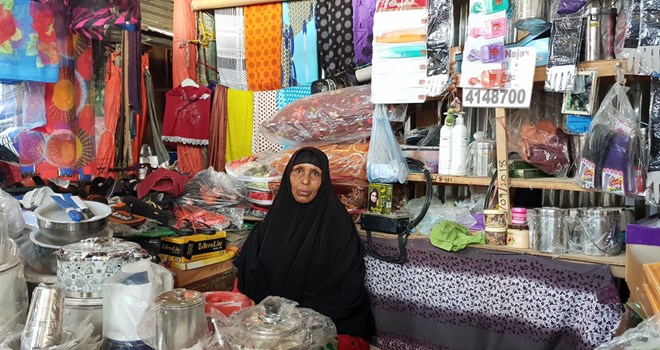 Fauzia Mohamud Hassan’s life looked shattered when the drought of 2015 claimed her entire livestock leaving her with no source of livelihood and eight children to feed and educate.

She had a large number of cows which she would sell at the slaughter house in Hergeisa, Somaliland and make a living.

But things went south for the 60-year old as her cows started dying one after another due to lack of pasture and water.

“I lost over 30 heads of cattle due to the drought. It left me shattered,” she says struggling to her eyes from tearing.

For a year, she struggled to survive on the little savings she had, which also ran out leaving her with nothing to live on. Her small stall at the Mohammed Moge market in the outskirts of Hergeisa was not bringing enough income to sustain her family.

In Somaliland, women do not own land, neither do they own property but this was not going to dampen the spirits of Fauzia who was determined to source for other ways of eking a living.

As with many developing countries, women in Somaliland are still hugely unbanked or more under-banked than men. But they (women) dominate the Micro and Small Enterprises (MSE) the country.

Fauzia and other women at the market joined hands to form a women group through which they would raise money to boost their small businesses.

In 2016, their group members were able to access loans from Somaliland’s leading financial institution Dahabshiil through its subsidiary company MicroDahab.

As part of its corporate social responsibility, Dahabshiil set up MicroDahab, a microfinance institution to help small scale businesspeople like Fauzia to build their status in business.

“MicroDahab is the group’s way of giving back to the communities,” says Hodan Ali Hassan, the Chief Executive Officer of MicroDahab.

Founded in 2014, to create employment opportunities for the youth, women, start-ups and small-scale farmers to fight and reduce poverty, MicroDahab has served upwards of 13,002 clients.

Many of MicroDahab’s clients are young entrepreneurs, most of them being women, who venture in farming, fishing, agriculture, livestock, and diary, among many others. MicroDahab has branches all over the Somali territories.

Hodan says, “We at MicroDahab believe that women’s financial empowerment contributes significantly to enhance employment rate in the Somali territories, GDP growth as well as serve as a successful strategy for the creation of a better society and responsible future generation.”

MicroDahab does not require any collateral from its female clients and Self Help Groups don’t need to provide a third party guarantor. This is a unique attribute that differentiates them from banks.

Hodan says previously, businessmen could not access loans because banks demanded for security and could not offer small loans.

When opportunity presented itself, Fauzia first took a US$ 300 to purchase wares for her small shop. The repayment period was six months which she was able to repay and take a further loan of US Dollars 600.
“Slowly by slowly my business started to grow because I could now purchase the products that were in high demand,” she says.

“Today, I am more comfortable, my business is doing well and my children can be able to go to school without any problems,” she added.

“My eldest child has graduated from university while two others have enrolled to the university. The others are in primary and secondary schools.”

A few meters from Fauzia’s stall is Fatima Abdi Ali who makesdoughnut and supplies to restaurants in the town.

Ali is also a beneficiary of the MicroDahab scheme which she says has turned around the lives of many women in Hargeisa.

Just like Fauzia, Ali too has a large family to take care of including her sick son and his children.

“We make group savings of around US Dollars 7 (Ksh 700) a day and at the end of the month, one of us gets the lump sum amount. Its like a merry go round,” says Ali who took an initial loan of US dollars 250 and doubled that upon repayment.

But MicroDahab is not targeting women only. Adan Osman, a fisherman in Berbera is perhaps the most successful example of MicroDahab.

Osman was among the first MicroDahab clients in 2014 when people in Somaliland did not understand the true meaning of micro financing.

“Microfinancing was something new here (Somaliland). I also knew little about it but after getting to know how it works, I took a loan of Us Dollars 500 which helped me purchase better boats and fishing equipment,” says Osman who now owns a large shop selling fish in Hargeisa.

Today, Osman is preparing to borrow US$50,000 to set up what he describes as a fishing empire in Berbera, the second largest town in Somaliland.

Hodan says the MicroDahab has turned around the lives of over 4,700 men and women who have taken advantage of the program.

“We allow then youth, men and women to present their business ideas to Microdahab and based on the ideas we scale the financing limit to between US$5,000 to US$25,000 per business. They come up with an idea that can be financed with minimum risks and we offer the funding,” she says.

“But the major objective is to create opportunities to the youth who are at risk of violence, migration and other social problems,” he adds.

Unemployment rate stands at over 70 percent in Somali, many have migrated to Europe, some die at the high seas trying to find a route to Europe hoping for a better life, but the Microdahab programme has made many think twice about migrating.

In 2015, MicroDahab MFI announced a collaboration with SolarGen Technologies to create the first ‘ijarah thumma Iqtina’ (‘lease to purchase’) sustainable energy products in Somalia. The initiative enabled clients to own solar-powered water pumps which would otherwise be prohibitively expensive for farmers and other small business owners to buy.

Dahabshiil Group Chief Executive Officer, Abdirashid Duale says: “We introduced leasing products to transform the lives and fortunes of many communities in a socially responsible yet sustainable way. MicroDahab is bearing both the capital cost and risk of asset ownership, while our clients reap the benefits of using the water pumps, at minimal fees.”