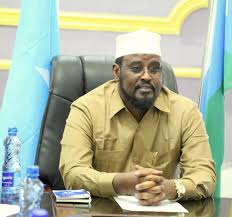 The election in the Somalia state of Jubbaland where Sheikh Ahmed Islam Madobe wants to retain the presidency is turning into a battle on land and online.

Candidates have been busy trying to win the influence of key clan elders who form a college that votes in leaders.

But even as Madobe looks strong, his rivals have used proxies to accuse him of fuelling latest violence or claiming he has lost ground with the top elders.

This week for example, a story circulated on some online platforms claiming Kenya Defence Forces (KDF) soldiers have retreated from Kismayu airport.

It turned out untrue because KDF, as part of the African Union Mission in Somalia (Amisom) is based in Dhobley, still in Jubbaland.

KDF spokesman Paul Njuguna told the Sunday Nation that Kenyans have not vacated their positions.

But the reports are only part of the subtle information wars swirling in Jubbaland, inevitably involving Kenya and Ethiopia – two countries with troops in the area.

Opponents of Madobe would jump on the “retreat” to push through criticism that he has yet to secure the state five years since he took power.

On Saturday, an aide of Madobe said such claims are expected during campaigns. “People will try every trick in the book to win. I will not be surprised,” the aide said.

Madobe’s office, he said, has a strategy to fight back “character assassination, distorted campaigns and hate”. “He is close to people. Most of these guys competing do not even live in Kismayu,” the aide added.

Madobe faces opposition from Abdinasir Seraar, who was with him in the Ras Kamboni Brigade, the militia that worked with KDF to rout Al-Shabaab in Kismayu in 2012. Seraar now runs a separate militia group.

Ahead of the August 24 elections though, Madobe has faced a security challenge and candidates said to be fronted by the Federal Government of Somalia under President Mohamed Abdullahi Mohamed, alias Farmajo.

Last week, some elders in Kismayu received leaflets telling them Madobe has lost support of the Ogaden clan, the largest in Jubbaland and which he belongs.

The claim arose even as Al-Shabaab warned elders due to conduct elections to register with the group within 45 days.

Getting the support of elders means one foot in office. Due to the security situation, Somalis have not implemented the one-vote-one-person system.

The elders chosen by the electoral commission select three candidates for every parliamentary seat.

The names are then forwarded to the agency which picks one per slot until the 75 MP slots are filled.

The selection follows the clan balancing formula – 4:5 – four main clans and a coalition of smaller ones.

None of the main contenders comes from Farmajo’s Marehan clan, which would have been difficult to win, given both presidencies are supposed to alternate.

Analysts however think it was his strategy to influence the vote by convincing his clansmen to stay sway and make it look unfair.

“Farmajo’s administration wants to make sure the states are under his control before completion of the future constitution,” Abdiwahab Sheikh, a governance and security consultant, said.

He was referring to the constitutional review which has stalled following disagreements between the states on one hand and the federal government on the other.

Farmajo criticised Jubbaland rules of elections. By seeking to divide Madobe’s Ogaden clan – which also has a presence in Kenya and Ethiopia – Sheikh said, Marehans can vote for anyone Mogadishu endorses.

Guled Omar Osman, a Kismayu native who has written on Jubbaland politics, says the sponsored candidates are part of a wider project to reduce the influence of Kenya in the region.

“They are financing candidates…against the wishes of the people so that they have influence in Jubbaland and fade off Kenyan impact,” he said referring to KDF’s alliance with Madobe’s Ras Kamboni Brigade.

Until last month, Kismayu had not faced a serious Shabaab attack. But the siege on an hotel in which 26 people were killed turned political.

Some people accused Madobe of engineering the attack, claims dismissed by his office. “He is sincere in the war against extremist groups and he fully understands the operations of al-Shabaab. That is why Jubbaland is enjoying relative calm,” said Madobe’s ally Ahmed Mohammed.