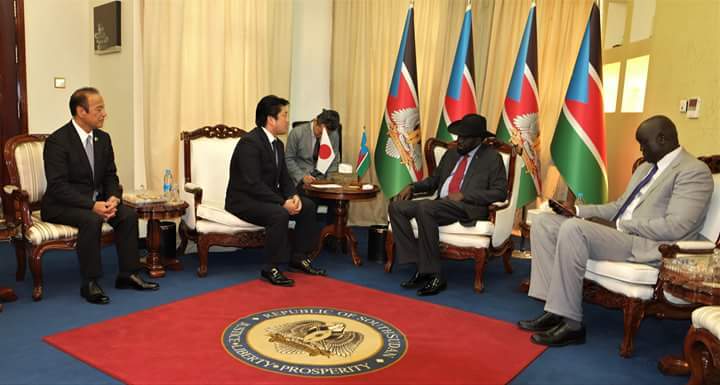 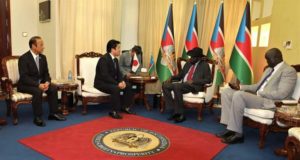 Japanese Defense Minister meeting President Salva Kiir at the state house in Juba on Thursday 16th August
JUBBA–South Sudan President, Salva Kiir Mayardiit, met on Thursday a Japanese Defense Minister in the nation’s capital Juba and discussed the ongoing peace process in the Sudanese capital Juba beside military cooperation.
Sources however told the Nyamilepedia that the Japanese Minister is in the country to strengthen Military ties with the East African country.

South Sudan’s government and the SPLM-IO along with other armed and non-armed opposition groups signed a peace agreement in the Sudanese capital Khartoum early this month in an effort spearheaded by the IGAD to end the South Sudan conflict.

“His Excellency Salva Kiir Mayardit met with the Japanese Special Envoy and State Minister of Defense, Mr. Tomohiro Yamamoto at the State House on Thursday,” announced the Presidential Press unit in a statement seen by the Nyamilepedia.

According to the South Sudan Presidential Press Unit, President Kiir received a letter delivered by the Japanese Defense Minister from Prime Minister Shinzo Abe congratulating him over the recently signed peace agreement.

“The Japanese Defense Minister handed to the President a written congratulatory message from the Japanese Prime Shinzo Abe,” the statement said.

The statement further said the Minister confirmed that his visit to the east African country is to deliver an message from the Japanese Prime Minister and to check unidentified projects his country hand contracted with South Sudan.

“The Japanese State Minister of Defense said his visit to the Country is to deliver a message from his Prime Minister, Shinzo Abe, adding that his visit was to check on the projects carried out in South Sudan, as well as to see the working status of the Japanese contingent in the United Nations Mission in South Sudan,” the statement further added.

The visiting Defense Minister further said that the government and the people of Japan appreciated President Salva Kiir for signing the permanent cease fire and urges the President to maintain it for the nation to prosper.
Nyamile