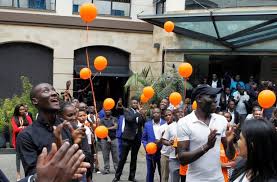 NAIROBI (Reuters) – The five-star dusitD2 Hotel in Nairobi will reopen its doors to guests on Thursday, six months after 21 people were killed in an attack on a hotel and office complex by Somalia’s al Shabaab militants.

Nairobi is a major hub for expatriates working in East Africa and in addition to the hotel the complex hosted offices of various international companies. The attack was an echo of a deadly 2013 assault on a Nairobi shopping center in the same neighborhood.

At a ceremony on Wednesday ahead of the hotel reopening, an orchestra played and motorcycle outriders accompanied runners led by 800 meter world record holder David Rudisha who carried the hotel’s flag from the airport. The flag had been flown in six countries to honor hotel staff who died in the gun and suicide bomber attack that involved at least five attackers.

“The raising of the dusitD2 flag marks the end of the journey that began when the dusitD2 Nairobi flag was hoisted at six dusitD2 properties including Bangkok, Bhutan, China, Dubai and has finally come back home,” Michael Metaxas, dusitD2 general manager, said at the event.

The hotel, part of Thai hotel group Dusit Thani is housed within the dusitD2 complex. The complex was also home to offices of companies including Colgate Palmolive, Reckitt Benckiser, Pernod Ricard.

It was not immediately clear how many firms maintained their offices at the complex following the attack.

Tourism and Wildlife Minister Najib Balala said he was upbeat about the tourism sector, forecasting a 10% growth in both arrivals and revenues over last year’s figures of just over 2 million visitors and 157.4 billion shillings ($1.51 billion)earnings.

“The spirit and the strength of Kenyans is back,” he said.