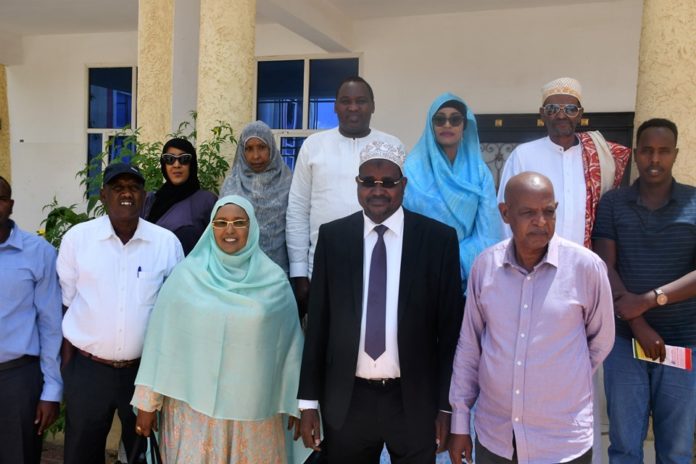 Hargeisa–The standing committee of Somaliland’s house of national assembly on Friday met with the Kenyan parliamentary delegation on visit to Hargeisa. The chair of the standing committee, Hon. Ahmed Abdi Nur aka “Kijandhe” flanked by the deputy chair of the committee, Mr. Ahmed Du’ale Bulale and member of the economic committee of the parliament held face to face meeting with Kenyan counterpart who paid a courtesy call to the republic of Somaliland. The meeting held at the parliament complex. The Kenyan parliament delegation have come to the country to participate the 28th independence anniversary where Somaliland is marking its secession from Somalia in 1991 after Somalia descended into state of chaos and anarchy. Ms. Safia Abdi Nur is leading the Kenyan parliamentary delegation and is accompanied by 5 others members of parliament elected from various constituencies in Kenya. The chair of parliamentary committee briefed the parliament delegation on Somaliland history and its recapture of Independence from rest of Somalia in 1991 following the disintegration of the Greater Somalia. The parliament delegation was reminded that Both Kenya and Somaliland were British protectorates. Mr. Kijandhe thanked the parliament members from Kenya on embarking on fact finding mission to Somaliland. It is agreed that both parliament reiterated to establish close partnerships. Kenya foreign affairs ministry recently appointed a diplomat to head its liaison office which is expected to open in Hargeisa. Kenya, Somaliland are keen to further boost trade ties.