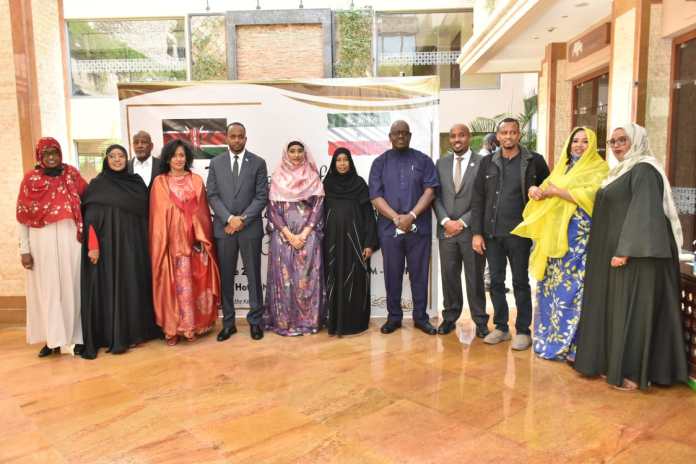 The caucus is meant to strengthen cordial ties of friendship between Kenya and Somaliland as an avenue to accelerate and promote regional integration through economic cooperation, trade and security.

To cap the event, the Somaliland Mission in Kenya organized a working luncheon MPs who worked out the technicalities of the caucus, charting out both immediate and planned activities aiming to accelerate relations that the two respective presidents of the two East African presidents, Uhuru Kenyatta and Musa Bihi Abdi, agreed on at the latter’s official visit to Kenya mid-December year.

Speaking at the event, Honorable Sophia A. Noor, MP, Ijara, elected Chairperson of the Kenyan-Somaliland Parliamentary caucus, expressed how delighted she was on being part of a living history aiming to lead the two countries to new heights of cooperation and prosperity for their respective peoples.

Hon. Sophy took the opportunity to specifically highlight the critical role the Somaliland Mission in Kenya played in the organization of the event that, again, brought the august MPs together.

“I would like to take this golden opportunity to thank each and every one of you for gracing today’s Kenyan Somaliland parliamentary caucus luncheon at Serena which indeed happened successfully,” she said.

“Am particularly very grateful,” the Honorable MP added, “to the Head of the Somaliland Mission to Kenya Ambassador, H E Bashe, for the organization and sponsoring the event. Special thanks also go to the Delegation from Somaliland led by the Foreign affairs minister. Am also indebted to the Chief Guest, Hon Dr Keynan, who is also Jubillee joint parliamentary secretary”.

The Acting Foreign Minister of the Republic of Somaliland, Liban Yussuf Osman, underlined how honoured he was to attend the formal launching of the caucus.

“I am so pleased,” he said “to attend the historic and auspicious occasion where the Kenya-Somaliland parliamentary caucus is being formally inaugurated,” he said.

He said the day marked an important milestone and an anchorage in the friendship between Kenya and Somaliland.

Minister Liban stated that the caucus will certainly play a leading role in sealing an unbreakable bond between ‘two great nations’.

Shortly before the Serena event, the MPs released a statement briefly outlining underlying objectives and tasks ahead for the caucus that was being officially launched.

The Kenyan MPs stated that, to start with, they will ‘push the government to hasten the implementation of the agreements in the communique signed between Kenyatta and Bihi’.

Among the other honorary guests attending the event were Amb. Abubakar Ogle and Rosemary Odinga.