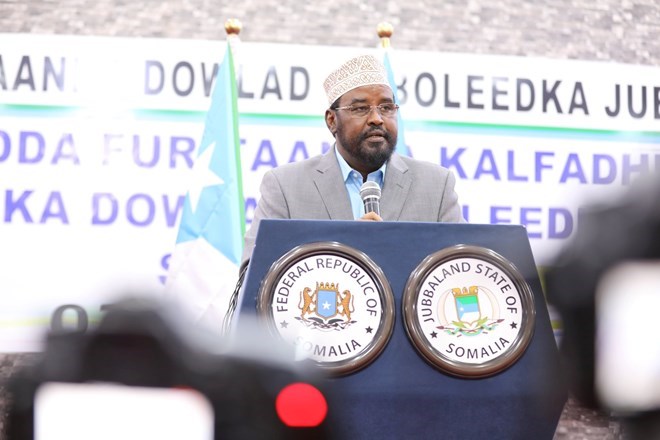 Jubaland’s president Ahmed Islam Madobe while speaking at the opening ceremony of the state’s parliamentary session, he praised the Jubaland parliament for preserving and working under extremely tough conditions including the constant threats and interference from the Federal Gov’t of Somalia.

Madobe, who is serving his third term as the regional president, in his address said his administration is currently working on devolving the gov’t to bring services closer to the local communities and uniting the fiscal systems and the treasury.

The fight against Al Shabab, he said is the most important priority, adding that plans underway to retake the state’s capital Bu’aale from Al Shabab.

Madobe who has been locked horns with country’s leadership in Mogadishu has said that the security situation in the country has deteriorated under the current Federal administration.

Jubaland now accuses the country’s current Federal administration of sharing a lot of practice with Al shabab, phrasing the possibility if their being cooperation between the two.

The state argues that party of the country that was free when they came to power is now under Al Shabab.

Kismayo also believes that President Mohamed Abdilahi Farmajo can not be entrusted with any of the gov’t institutions as they have misused the national army, treasury and the intelligence agencies. control of the airspace of the country’s finances.

The interference of the affairs of their member state, they say is a policy adopted by the current Federal administration that will never succeed and their efforts to bribe leaders to follow their ideologies and doctrine are bound to fail.

President Ahmed Islam Madobe while addressing the parliamentarian, also accused the central gov’t of Somalia of countless attempts to bribe him to stand down and agree with all the current administration policies.

Although Madobe was talking tough many in his address, the underlined statement in his speech was readiness for dialogue with the Federal Gov’t of Somalia under the constitution framework of arbitration.