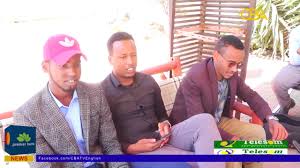 A group of journalists came together in Jigjiga, the administrative seat of Somali region of Ethiopia to protest the challenges they encounter in their journalistic work.

They lamented the gov’t for conducting business behind closed doors and blocking journalists from covering gov’t conducts.

The reporters condemned the gov’t decision to bar them from attending parliamentary session.

“We find information from many places  and one such places the parliament. lawmakers are the representatives of the people. their constituencies have the right to know what their representatives are doing. We have the right to cover them. Blocking us from parliament hurts our work. The government is to understand the importance of freedom of speech and the freedom of the press.” Said a reporter.

The reporters’ in the Somali region of Ethiopia are quite vocal when it comes to their right accessing information.

They argue that its their constitutional right to get access to information.

“I am condemning the transgression against journalists. When there are ceremonies and conferences in support of the gov’t the media is invited to cover the events. But when there important issues at hand such as the parliamentary session or party conference are held on closed doors.” a reporter cited.

They asserted that the constitution guarantees the right to have access to information in order to share with the public.

For the past couple of weeks journalists in the region were busy holding gatherings to coordinate their response to the professional roadblocks that they face on daily day basis.

They called upon the gov’t to reconcile the relationship with independent media are to refrain from blocking access to information.