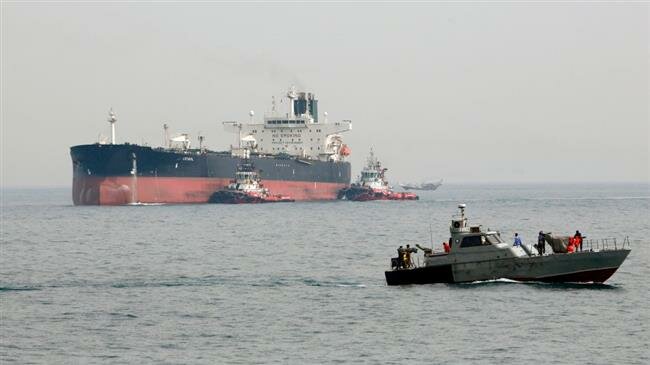 TEHRAN (FNA)- Iranian Foreign Ministry Spokesman said that his country’s naval forces have assisted a disabled oil tanker owned by a foreign party near the territorial waters of the Islamic Republic in the Persian Gulf after receiving an SOS signal from the vessel.

Mousavi told IRIB News late on Tuesday that the tanker suffered a technical glitch, and accordingly sent a distress call.

He added that Iranian forces rushed to the scene after receiving the call, and tug boats salvaged the disabled vessel and towed it towards Iranian territorial waters to undergo required repair.

Earlier in the day, the Associated Press reported that an oil tanker of Emirati ownership had been unaccounted for in the Persian Gulf for three straight days. The Panama-flagged vessel Riah reportedly went off radars on Saturday. The tanker had apparently turned off its transponder.

The AP cited an unnamed Emirati official as saying that the ship was “neither UAE-owned nor [UAE-]operated” and carried no Emirati personnel. “We are monitoring the situation with our international partners,” the UAE official noted.

The 58-meter-long tanker would usually freight between Dubai and Sharjah. The ship’s registered owner, the Dubai-based Prime Tankers LLC, said it had sold it to another company called Mouj al-Bahar. The agency contacted the latter firm but was notified that it was not running any ships at all.

Last month, Iranian naval forces were the first who came into the assistance to rescue the crew members of the two oil tankers which were hit in the Sea of Oman.

Iranian rescue vessels picked up the 23 crew members of one of the tankers and 21 of the other from the sea and brought them to safety at Iran’s Jask, in the Southern Hormozgan Province, an informed source said on June 13.

Earlier, media reports said explosions had occurred on the two oil tankers, apparently as a result of attacks.

While the US Navy claimed it had been assisting the tankers, the Iranian rescue vessel was first to reach them and rescue the crew, who had plunged into and were floating on the sea to avoid the fire.

The MT Front Altair had been loaded at a port in the Gulf of Oman with a petroleum product known as naptha, and was on its way to the Far East. Its crew of 23 is safe after being evacuated by the nearby Hyundai Dubai vessel.

Meanwhile, BSM Ship Management says its crew of 21 aboard the Kokuka Courageous carrying methanol has also been rescued in the Gulf of Oman by a nearby Iranian vessel after what it described as an “incident on board which resulted in damage to the ship’s hull starboard side”.

Hours after the twin attacks, a prominent Saudi expert, Hezam al-Hezam, said that the Emirati intelligence agency targets oil tankers in the Persian Gulf and the Sea of Oman in a move to inflame war against Iran.

“The UAE is playing with regional security after targeting the oil tankers in the Sea of Oman and therefore, it had declared a state of emergency before the incident. The reason is to make the US agree with military attack against Iran and win Oman and Pakistan’s support,” he added.

Hezam said that Iran is not naïve to threaten shipping in the region through such an option, irrespective of the economic sanctions imposed on the nation.

He also referred to the incidents which happened for oil tankers in Fujaireh in May, and blamed Mohammed Dahlan, a senior advisor to UAE Crown Prince Mohammed bin Zayed, for them.

“I had told you in Ramadan that Abu Dhabi has inflamed war in the (Persian) Gulf with Riyadh’s support. They think that (war) is a kids’ game. Iran can annihilate the UAE only with a single retweet,” Hezam said.

A day later, Advisor to the Iranian Parliament Speaker Hossein Amir Abdollahian, in a tweet on June 14, said that American and Israeli intelligence services were the main suspects behind the attacks on two oil tankers in the Gulf of Oman, adding that Saudis Arabia, the UAE, and Bahrain are worsening the situation in the region.

Zarif, in a tweet on June 14, rebuffed Pompeo’s allegations against Iran, saying they were part of the “sabotage diplomacy” pushed by the “B-Team”.

In a follow-up Twitter post, Zarif said, “I warned of exactly this scenario a few months ago, not because I’m clairvoyant, but because I recognize where the #B_Team is coming from.”