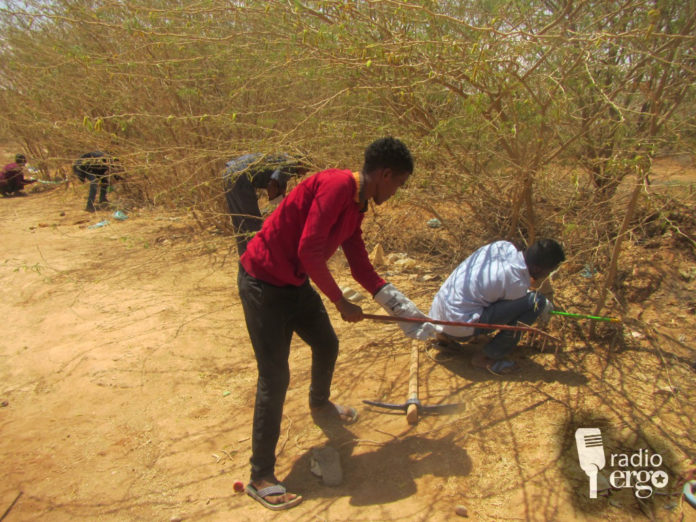 Pastoralists and farmers in Teleh, in northern Somalia’s Sool region, are increasingly worried about an invasive parasite tree that is threatening their livelihoods.

Prosopis juliflora tree, locally know as Ali-Garoob, is an invasive and drought-resistant weed that been spreading uncontrollably for the past three years. It has thrived in harsh dry weather, spreading through the grassland where the livestock normally graze.

Local people report that the tree is now dominating vegetation in Margamal, Gabi-geedh and Heri-heere valleys. Pastoralist families in the area can barely find any grazing grounds for their livestock.

Around 1,500 pastoralist families used to graze their livestock in Dhumay valley, but only 200 are still doing so because they fear that excessive consumption of Ali-Garoob is harming their livestock.

Mohamed Abdi Hassan has recently returned to Dhumay valley after migrating away to southern Sool at the height of the drought in search of water and fodder for his livestock.

“This valley used to be famous for grass which was high in nutritional value, but it [the weed] has blocked off the other trees. It has become a habitat for other wild animals. I n the last 20 days I have lost four goats to hyena and wild cat attacks,” Mohamed told Radio Ergo.

Local efforts to contain the spread of the trees have proved futile. They have tried to cut, burn and spray kerosene on the bushes without lasting effect.

“This camel that used to provide milk for my children has consumed the prosopis juliflora tree and it suffered days of stomach pain. We tried to save it but sadly she died. To find out what killed the camel we cut the stomach open, and we saw inside many seeds of the tree,” said Qulle, who returned to the area following the onset of rain.

Hussein Halane, the head of the farmers’ association in Halin, told Radio Ergo that 80 farms had been invaded by the trees. The farmers had been forced to leave the area, and had moved to Lasanod looking for a living.

Mohamed Suleyman Ali, the head of the Da’algaarshe Environmental Conservation Centre in Sool, noted that the most effective way to deal with Ali-Garoob is to burn it.

“The tree leaves are green in both rainy and dry seasons. When the seeds of this tree fall to the ground they quickly germinate into a tree, and when the livestock eat the seeds and defecate elsewhere they help spread the seeds,” said Mohamed.