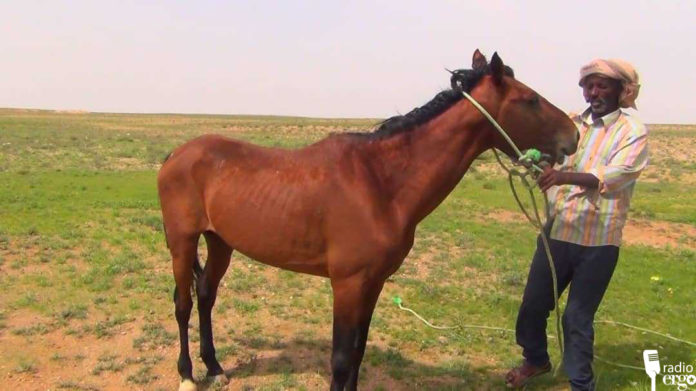 Dahir Mohamed Jam’a has lived around horses all his life but changes in the way of life in northern Somali and perennial drought has meant that indigenous Somali horses are fast dying out.

“Since childhood I have lived with horses. I have reared horses for 30 years but noweverything is completely changing. Horses relied on certain grass in the valleys and such grass has become extinct,” Dahir told Radio Ergo.

In the last five year, Dahir has lost nine of the 11 horses he inherited from his father in Sibbaye village in Sanag region’s Hingalol district.  He believes there are only around 30 horses remaining in the district.

Somali ponies have been around for decades and have adapted to withstand the harsh climate and poor food sources. In the past they were bred for use in inter-clan warfare, for going in search of livestock, and to pay wedding dowries.

“When a man wants to marry a girl, he used 100 camels and a horse.  Horses are used to welcome leaders and people used horses for exploration to search for water and pasture,” Dahir explained.

He lost his last horse in April, after coming back to Sibbaye from Badhan, where he had moved with his livestock in search of water and pasture.

“I left three horses in the village when I left for Badhan, but returned to find only two weak horses. They were so weak they could not even run away from the hyenas,” Dahir said sadly.

“They have been able to survive in such a climate as this but now their food is becoming non-existent,” said Dahir, who has two stallions left.

Ali Diriye, 80, also in Hingalol district, has reared horses for 50 years. He regrets the fact that horses are dying out.  For most herders they are too expensive, costing at minimum $2,500.

“The horses are not sold in the markets. People liked to buy them from the owners in different places. But they are very expensive compared to camels,” Ali said.

Another horse keeper, Osman Farah Guled, lost several horses during the recent drought.  He remains with just a mare and a stallion. Unfortunately, when times are hard and food is so short, pastoralists have had to choose between horses and their other livestock.

“This problem has been going on for a long time. We face a difficult choice when severe drought hits your area – you can either save the horses or the other domestic animals that are our lifeline,” he said.

Ali Askar, a veterinarian, attributed the near extinction of horses to disease and the lack of food. He said keeping animals healthy needed to be prioritized.