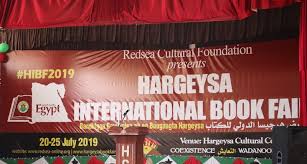 on the edge of the Horn of Africa, Somaliland is not recognized by the rest of the world. No matter, a book madman decided to bring the world to this isolated territory by creating his ideal library there.

How to create the national archives of a country that does not exist? The method is the same as for all the other projects that are born in Somaliland: we start from nothing. Literally, in this case.

In 1991, in the rubble of Hargeisa, newly proclaimed capital of Somaliland [le territoire venait d’acquérir par les armes son indépendance vis-à-vis de la Somalie], a seller of camel milk tea and lahoh, spongy pancakes, handed a piece of paper she had picked up from the floor to a customer so he could wipe his hands. Jama Musse Jama was about to roll it into a ball when the text caught his eye.

It was a fragment from the media file of a media trial which, ten years earlier, had sent hundreds of members of a student movement to prison. Jama was about to leave for Italy, where he was awaiting a post as professor of mathematics. But he asked the tea trader for permission to collect the rest of the leaves she had collected. Then, he strolled through the other parts of the ruined center to collect as many documents as possible.

A window to the world
At the time, Somaliland was mainly trying to forget its trauma, wiped out after three years of a merciless civil war, during which the territory had been bombed by the Somali state. Hargeisa was 90% destroyed and the self-proclaimed nation had just declared its independence [jamais reconnue par la communauté internationale]. But Jama figured that someday Somaliland might want to remember.

Thirty years later, the papers he picked up in 1991 have become the founding pieces of informal national archives he created in Hargeisa. Like Somaliland, his project is a “tinkered” institution, built from the ground up and almost without any outside help. And like the self-proclaimed republic, which is not recognized by any other nation in the world, its very existence is an act of resistance.

THIS COUNTRY IS POOR. MOST OF ITS BUDGET MUST BE DEVOTED TO THE VITAL NEEDS OF ITS CITIZENS, I UNDERSTAND, JAMA EXPLAINS IN MELODIOUS ENGLISH TINGED WITH ITALIAN, AN ACCENT HONED DURING HIS YEARS OF TEACHING IN PISA. BUT WHEN YOU ELIMINATE THE ARTS AND CULTURE FROM THE SOCIETAL EQUATION, YOU ARE ELIMINATING WHAT MAKES HUMANITY HUMAN. I WANTED TO MAKE SURE THAT WE NEVER GOT THERE IN THIS COUNTRY. ”

For the rest of the world, Somaliland is none other than a province of Somalia: a territory, which, according to World Factbook published annually by the CIA, at “Separatist ambitions”. However, in Somaliland there is a government, borders, police, army and currency. The region organizes its elections and collects its taxes. But the international community does not give it any legitimacy, Somaliland is deeply isolated. Most of its inhabitants cannot travel because their passport is not recognized or simply because they do not have the necessary funds.

Fifteen years ago, this isolation gave Jama an idea. Why not create an international book fair there? “We should offer people a window on the world, he remembers having thought. And since most people don’t have the opportunity to travel, so the world has to come to them, and books are the best way to get there. “

A book fair and an ideal library
His idea was not unanimous. But he ignored these criticisms and, in 2008, organized the first edition of the Hargeisa Book Fair in the skyscraper capital of Somaliland. The theme that year was “Freedom at a Price”, referring to the arrest of a group of journalists the previous year – a disturbing first in the short history of the all-new country.

In 2008, the fair attracted 200 people. In the course of the 2010s, this figure increased to nearly 10,000 visitors. Jama did not want to see this enthusiasm fall for the other 360 days of the year. There were few bookstores in Somaliland, after all, and even fewer libraries. And those that existed left much to be desired.