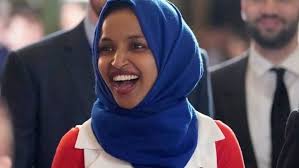 Minnesota Democratic Rep. Ilhan Omar once spoke to an audience segregated by gender in her native Somalia, as she praised the country’s efforts empowering women and sought to contrast that with America’s.

According to a translation of the remarks, though, she did not raise the matter of the audience’s segregation during that 2016 speech.

Omar, the embattled freshman Democrat who’s faced numerous controversies over comments decried as anti-Semitic and other statements, appeared on the “Deprani show,” a Somali news show, following her election to Minnesota’s House of Representatives.

The show, which celebrated Omar’s victory, was filmed at Puntland State University in December 2016 and featured prominent shots of women and men seated separately.

During her remarks, Omar praised Puntland, the semi-autonomous regional territory of Somalia, for setting the goal of a 30 percent quota for women in legislative positions.

“There in America [we are] yet to achieve that, so, we’re looking for that justice and the same justices for the different races, genders and everything,” she said, according to the translation.

“There in America [we are] yet to achieve that, so, we’re looking for that justice and the same justices for the different races, genders and everything.”

But Omar’s appearance at the event and lack of comments about the segregation in the room were striking considering her image as a barrier-breaking politician who fights for women’s rights everywhere.

“I stand in solidarity with everyone who is fighting to protect the rights of women and girls, domestically and internationally,” she tweeted in March.

Omar has been critical of other countries over human rights violations, often criticizing Saudi Arabia for its women’s rights record.

“The Saudi government might have been strategic at covering up the daily atrocities carried out against minorities, women, activists and even the #YemenGenocide, but the murder of #JamaKhashoggi should be the last evil act they are allowed to commit,” she tweeted last October.

But the same criticism hasn’t been extended to Somalia where she wields influence due to her political success in the U.S.

A U.N. report several years ago described gender inequality as a serious problem in Somalia, citing violence against women and “extremely limited” women participation in “politics and decision-making spheres.”

Omar’s office did not respond to Fox News’ requests for comment for this report.