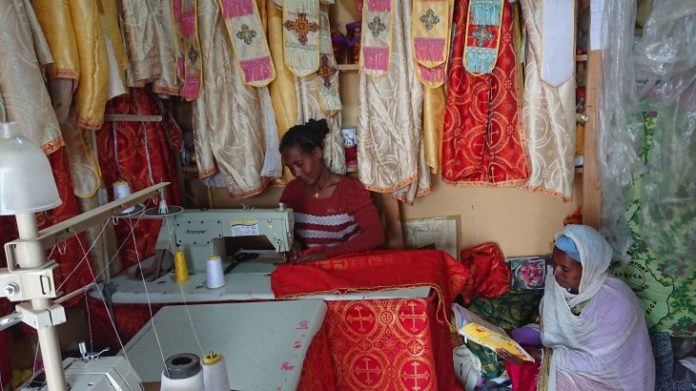 Hiywot works on a sewing project while her customer waits at her shop in Mekelle town. CC BY-NC-ND / ICRC / Khurshed Musoyatov

Hiywot Gebreegziabher, a 40 years old woman, returned home to Ethiopia in 2017 after living as refugee in Eritrea for many years. When she arrived in Mekelle town in north Ethiopia, she was worried as she had nothing to support herself and her young daughter. And so she had to live in her cousin’s house. Fortunately for Hiywot, this dependent life did not last long and she was soon able to start to engage in an income-generating activity with the support she received from the ICRC and Ethiopian Red Cross Society (ERCS).

The ICRC provided her with a sewing machine and its accessories in 2018. After receiving the equipment she begun sewing religious attires, an activity which she says, was turned into a profitable business.

“Not only was I able to be self-supportive but I also managed to send my daughter to a private school, which was unthinkable for me to do before,” said Hiywot. Her monthly net income now stands at 3000 Birr or about 24 US dollars.

About 1,250 Ethiopian returnees, most of them living Mekelle town, have become beneficiaries from the cash assistance provided by the ICRC and ERCS since 2012. In 2017, the ICRC launched micro-economic initiatives (MEI) for repatriated households in Mekelle town. Hiywot is one of the repatriates who benefitted from this assistance.

“The project is aimed at helping returnees to become self-supportive by engaging them in various small businesses of their choice,” said Khurshed Musoyatov, an ICRC staff. “Since 2017, over 200 returnees have been supported with this assistance,” he added.

26-year-old Filmon Gbreegziabher is another recipient of the project and supports three family members. He has been engaged in the carpentry business since 2018 following his repatriation from Eritrea.

“The wood cutting machine and other necessary tools I got from the ICRC and ERCS have served as the seeds to start my business,” Filmon remarked. He produces beds, sofas, and other wooden products. According to Filmon, the opening of the Ethio-Eritrea border has increased the demand for his products enabling him to expand his small business. “I now have eight people working for me.”

Another repatriate, Gebregiorgis Berihu says, “I appreciate the Red Cross’ efforts in providing me with a laundry machine and other related tools. I can now generate a modest income which is enough to support my family.” 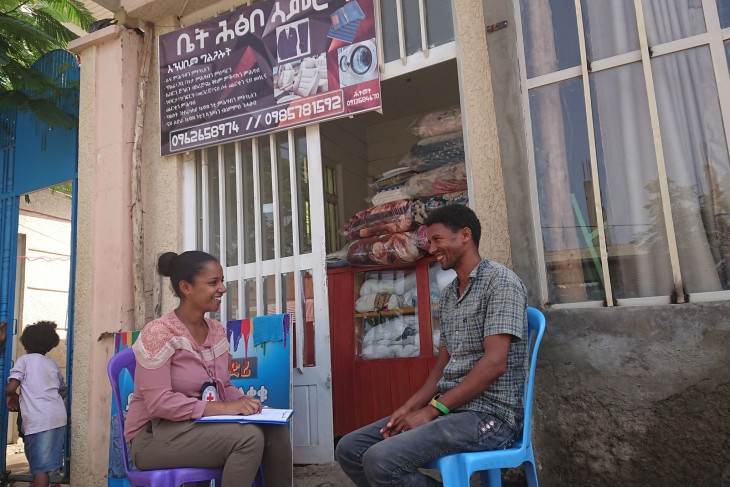 The ICRC, in partnership with the ERCS, helps people affected by conflict and other situation of violence.It also engages in dialogue with relevant authorities to sensitize them as to the needs of displaced people and about efforts to protect health centers and allow circulation of ambulances transporting the sick and wounded.