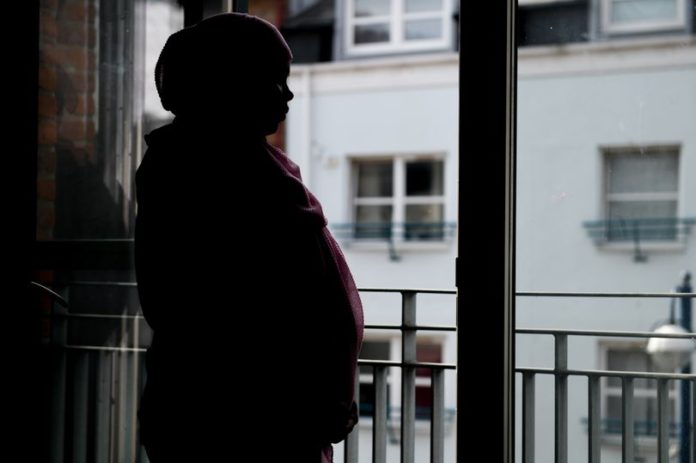 She had been trying to live on £10 a week after the Home Office said it was ‘safe’ for her to return to Somalia, despite her fears it would be a death sentence

A heavily pregnant woman who feared execution in Somalia if she was sent home has won the first battle in her fight to stay in Britain.

The asylum seeker, who did not wish to be named, previously voiced her horror at being faced with getting on the next plane home to the war torn country.

In a letter the Home Office had said she could return there as she was still able to fly at her stage of pregnancy and it was “safe.”

She feared she was going to be left to fend for herself as she will no longer have a roof over her head from April 29 and only had £10 a week to survive on through charity donations after the Home Office decided to cut off all her funding.

The 28-year-old said she was stunned at the decision at today’s London hearing which reinstates her funding, but was delighted it would be possible for her and her unborn baby to remain in the UK for the time being.

She said: “I couldn’t sleep the night before but I really feel happy.

“My solicitor said I won – I said ‘Really?’ I was shocked.

“The Home Office didn’t come to the hearing.

“The judge said I will not let you stay on the streets.”

She added: “I was so surprised, I couldn’t believe it, I was so happy.”

The woman, who is pregnant and unmarried, had previously said she feared “they will kill me” if she was returned to Mogadishu as her situation is not allowed there and she previously added: “There’s no way I can go back.

“Not having a house, knowing where to sleep or where to stay is really hard – I have never experienced being without a house – it’s traumatising.”

Violent crime ranging from kidnapping and murder, bombings and other attacks plague Somalia.

Her main fear as she continues her battle for full asylum in Britain is that she will be forced to move elsewhere in the country.

“They could send me anywhere in the UK, hopefully I will stay in Swansea as I do not want to go anywhere else,” she said.

She first came to Britain on a spousal visa in 2011 with her husband but she ended up becoming a victim of domestic violence, which led to her leaving London and ending up starting a new life in Swansea without the support of family and friends.

She successfully won her case after claiming she was left “destitute” by the Home Office after they withdrew her £37 allowance before she reached 20 weeks in her pregnancy, and she had her accommodation withdrawn.

It led her to seek the support of asylum organisation Share Tawe, who helped link her up with a host family, but they were only able to allow her to live there until Monday.

This week’s decision now means she no longer has to worry about her immediate future.

Bethan Sayed, AM for South Wales West, who is involved in the case, said she was determined to support the mum-to-be in her bid to win her right to remain in Britain.

“I’ve found out today that her section 4 support has been reinstated but she still has to fight her asylum claim,” she said.

“Thanks to everyone who has been supportive so far. Still a long way to go. If you want to help her please let me know. Many of you have already, and it’s been great.”

She added: “We will be campaigning for the Home Office to grant her asylum.”

Carolyn Harris, Swansea East MP, who vowed to bring her case to the attention of the Home Office, added: “Common sense prevailed. But this must never happen again.”