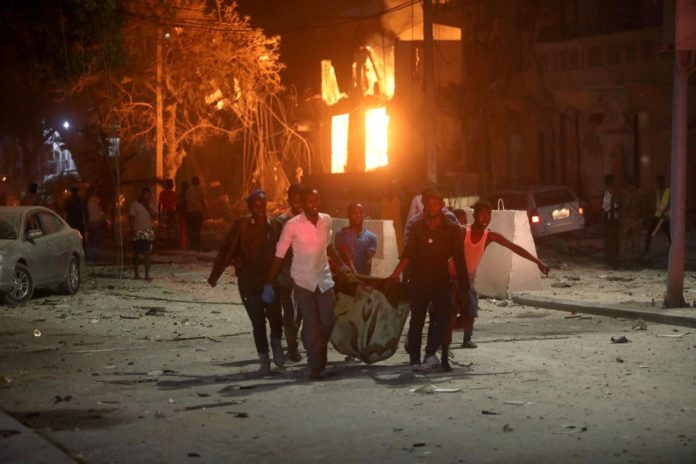 MOGADISHU — A gun battle raged in Mogadishu overnight Friday between Somali soldiers and militants from the Islamist group the Shabab who were holed up in a building next to a hotel that had been hit with a suicide car bomb the previous evening, killing at least 29 people.

Heavy gunfire resounded through the night across Mogadishu, the Somali capital, and as dawn broke after the blast near the Hotel Maka Al-Mukarama and a judge’s residence on a busy street.

“So far we know 29 people, mostly civilians died, and 80 others injured,” a police major, Musa Ali, told Reuters. “The militants are still fighting from inside a civilian house adjacent to the hotel. The death toll may rise.”

Another police officer, Major Mohamed Hussein, said, “The security forces rescued dozens of civilians in the hotel and nearby buildings.”

He added: “It was very difficult for the security forces to enter the building last night because it is dark and electricity was cut by the blast. Now it is daybreak, and we hope the operation will be concluded in the following hours.”

The Shabab’s military spokesman, Abdiasis Abu Musa, said the group still controlled the hotel. “The government tried three times to enter the building, but we repulsed them,” the spokesman said.

Many victims of Thursday’s attack suffered horrific injuries, and hospitals were said to be struggling to cope with casualties, The A.P. said. Some of the wounded had lost limbs, Sadiya Yusuf, a nurse at Daru Shifa hospital, told The A.P.

The hotel is frequently patronized by government officials, and militants from the Shabab have targeted it several times in past attacks that have killed scores of people.

The main street where the blast occurred was closed on Friday. Witnesses said they had seen frantic residents searching for missing relatives through the night, making countless phone calls to find out if anyone had seen them.

“I have been running to and fro from blast scene to hospitals since yesterday evening in search of my husband and brother who were selling a shop at the place where the blast took place,” said Halima Omar, a mother of three children.

“I have just seen them in hospital; they are in critical conditions,” she added. “My husband lost his stomach and my brother suffered severe wounds to both arms.”

Somalia has been convulsed by lawlessness and violence since 1991. The Shabab is fighting to dislodge a Western-backed government protected by African Union-mandated peacekeepers and wants to impose Shariah law in the country.

In 2015, the militants stormed the popular Sahafi Hotel in the heart of Mogadishu, blowing up the front gate with a car bomb, shooting guests and hotel workers, and then battling with security forces from the hotel’s rooftop for several hours. At least 14 people were killed in the attack.

In 2016, at least 14 civilians were killed and dozens were wounded after Islamist militants struck a popular beachside restaurant in Somalia’s capital.

The United States has drastically increased airstrikes against the Shabab since Donald J. Trump became president. The American military command for the African continent reported carrying out 50 strikes in Somalia in 2018.

This year, American strikes targeting Shabab fighters have come at an even faster pace. The military command in Africa reported 23 as of Tuesday, including one in central Somalia that killed 20 militants and another the day before that killed 35.