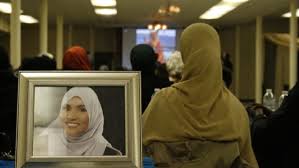 ‘She died doing what she loved, which is to promote the country of her birth’

Members of the Somali community in Edmonton organized a memorial Friday for the woman who dedicated her life to telling their stories.

Local politicians, community leaders and high school friends were among the roughly 50 people who gathered to mourn and celebrate Hodan Nalayeh, the beloved Canadian-Somali journalist.

The 46-year old was killed when militants attacked a hotel in the Somalian port city of Kismayo last Friday. Her husband, Farid Jama Suleiman, was also among the 26 people killed.

Nalayeh immigrated to Edmonton as a child in 1984 before moving to Toronto in 1992.

Heran Tessera, a friend of Nalayeh’s older sister, said she could see the intelligence and optimism Nalayeh embodied in her journalism while they were growing up together in Edmonton.

“I’m so proud of her, because she fully embraced both the Canadian and the Somalian, and then she was a voice for the Somalian community to show that there was a positive light for the community,” she said.

“She gave all of that up to go back to journalism so she could be the voice of the people,” Tessera said. 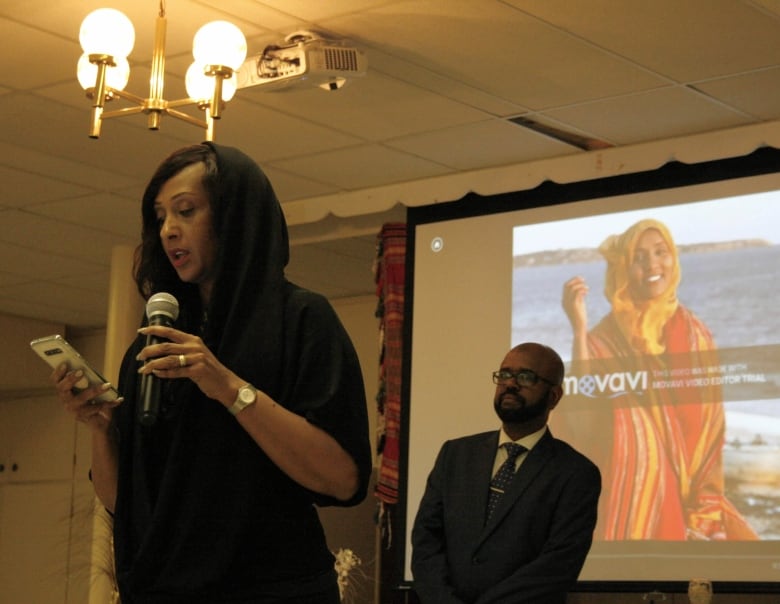 Heran Tessera reads from prepared remarks about her friend Hodan Nalayeh at a memorial in Edmonton on Friday. (Jordan Omstead/CBC)

Nalayeh went on to become the world’s first Somali media owner when she developed and launched Integration TV on OMNI TV, she told a 2014 House of Commons status of women committee.

Her journalism captured stories often absent from mainstream news without shying away from nuanced discussions. Her documentaries range from tackling tough questions like “who controls the Somali narrative?” to covering an Edmonton-Somali high school graduate celebration.

“Somali-Canadians want a discussion on more than crime and immigration. We are Canadian. We are proudly Canadian, and just like you, we want our children to be successful in school, in the workforce, in entrepreneurship and in Canadian society,” Nalayeh told the 2014 committee.

In recent years, Nalayeh returned to Somalia to share documentaries through the Integration TV YouTube channel, including profiles of entrepreneurial women and the construction of children’s libraries.

“Although we are saddened by her untimely death, I want you to remember she died doing what she loved, which is to promote the country of her birth,” said MLA Kaycee Madu, municipal affairs minister.

“To show the beauty and the good aspects of this beautiful country to the rest of the world.”

“That’s the legacy. That’s what she left,” he said.