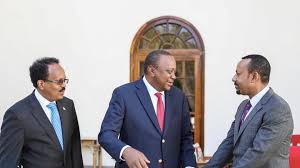 By the time George Bush Jr was two years into his first term, his approval ratings were low and errors and blunders in his speeches did not help his cause. It seemed certain that coming elections would see him become a one-term president like his father.

But as fate would have it, the conflicts in Afghanistan and Iraq removed the public eye from him to the urgency of the war. International disputes are a good way to win over the electorate to your side but at great cost to peace and stability.The president of Somalia, one Mohamed Abdullahi Mohamed aka Farmajo, seems to be in the same predicament as Bush. He has delivered nothing to his people and is the architect of the current maritime dispute between Kenya and Somalia.

Somalia claims the maritime boundary should be in such a way that Somalia gets more of the coastal waters. This would effectively make Kenya landlocked. This is despite the fact that Somalia has 10 times Kenya’s coastline. In this sense, Farmajo’s Somalia is acting like a bully—having its cake and wanting to eat ours too.The loss of territory would be a big blow to Kenya but a very small gain for Somalia in terms of scale. So one must wonder why a country with such vast coastal resources would be so interested in such a seemingly small area.Some have argued that it is because of the possibility of existence of oil wells in the disputed area. This may well be true, but it is also true that for the regime in Somalia to survive the coming elections, they must blind the people to their ineptness and use a dispute to win public favour.This is made possible by the proxy interests that Somalia politicians have. You see, the president has dual citizenship; he is both American and Somali, as most of the political leadership in Somalia. Thus they represent not just the interests of Somalia but also many foreign interests. These foreign countries consider Somalia a cheaper way to buy the oil blocks than Kenya. This is what emboldened Farmajo go to the International Court of Justice (ICJ).The ICJ is itself an unfavourable place for Kenya. This is not just because Kenya has a sour relationship with the International Criminal Court, but also because the ICJ is infiltrated by Somali interest. There are individuals there who are sympathetic to Farmajo and Kenya may not receive the justice it deserves.If the court grants Somalia’s wishes, ours would be the only coastline this side of the Indian ocean to have a diagonal line instead of a parallel one. This means most likely Kenya would have to equally change its border with Tanzania and that would cause all manner of tensions in the region.Never mind that should the court rule in favour of Somalia, Kenya would have ports and key maritime installations very close to Somalia, and thus the attendant risks of piracy and Al Shabaab in towns like Lamu would be huge.The risk to Kenya is great and the unnecessary tension brought between us and Somalia is a threat to peace and stability. The situation is made worse when one considers that Kenya, through Amisom, is one of the reasons why Somalia has a semblance of stability. Sticking a finger up the nose of your benefactors is never a good idea, which further cements my theory that this is more of a political survival trick for Farmajo than anything else.The cost of this is, however, steep. If Kenya decides to take action of any kind to protect its integrity and sovereignty, the region would be greatly destabilised and it is unlikely the foreign powers that have declared a proxy war would outrightly come out to defend Somalia.All the coastal countries on the Indian ocean will also be drawn in and I can bet my bottom dollar that Kenya would seek orders to have a similar border with Tanzania, putting Zanzibar and Pemba Islands in dispute. The problem will cascade through the years and make tensions between the coastal East African countries simmer.Farmajo’s recklessness may plunge the region into stormy waters, just so he can win an election, and keep on not delivering real change to the people of Somalia.

The only people that would benefit are the shadowy companies in London that were formed only to make use of the sale of the oil blocks. Strangely, these firms are eerily linked to certain powerful individuals within the Somali government. Small wonder then that the interests are more for the top few in Somalia than the rest of Somalia?Just like Bush, Farmajo seems intent on oil more than truth, peace, stability and prosperity of his people. He is leading a war-ravaged nation, hardly on its feet, into turbulence again—to a war that he most likely cannot afford and cannot win. Truth be told, Somalia can not even afford the legal fees at the ICJ and are thus relying on shadowy figures to foot the bill.One must ask then, who is is calling the tune? And how will the Somali government pay him back? The whole thing stinks for Kenya and stinks even more for the Somali people.Farmajo is playing Russian roulette with matters he shouldn’t. The lives of his people and our people are worth more than a dreamed up claim over waters that have never belonged to Somalia. He is whipping up emotions and tensions for no other reason than political expediency and like Bush Jr—win or lose—history will not judge him favourably.