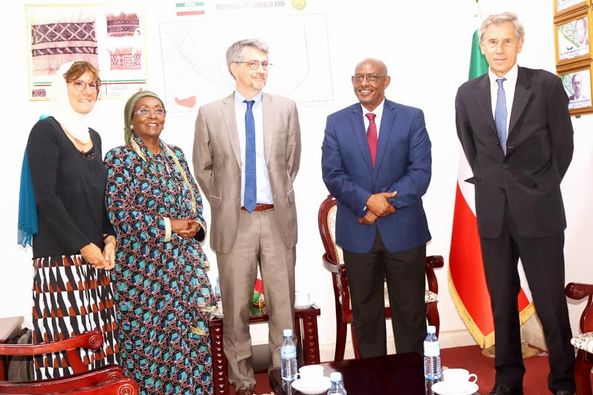 International diplomats in Somaliland have in recent days paid numerous courtesy calls to the new Minister of Foreign Affairs Hon. Dr. Isse, were apart to introductory, all reiterated strengthening the  cooperation with their respective countries and with Somaliland.

A top level delegation from the French Embassy in Nairobi, Kenya and the Ambassador of United Arab Emirates to the region H.E. Abdulla Alnaqbi were the latest to meet the Minister Dr. Essa Kayd Mohamoud yesterday, Saturday 2 October 2021 in a hectic fortnight of meetings.

Following the exchange of pleasantries, H.E. Ambassador Alnaqbi appreciated the excellent bilateral relations between the Republic of Somaliland and the UAE that has been marked by friendship and cordiality ever since the establishment of diplomatic relations.

Similarly, the Minister received in his office a delegation from the French Embassy in Nairobi whereby both sides discussed the historical and bilateral relations between French and the Republic of Somaliland.

Earlier in the past few days Dr Essa received dignitaries of Ethiopia, Djibouti, Taiwan, Turkey and several resident diplomats and members of International Community in Somaliland.

On the other hand, a handover ceremony between former Director General of the Ministry of Foreign Affairs and International Cooperation Mr. Abdulrazak Jama Nour and newly appointed Director General Mr. Mohamed Abdullahi Duale was held at Ministry’s headquarters.

Deputy Foreign Minister Hon Abdinasir Omar Jama handed over the reins to the two officials at the ministry headquarters yesterday.

News of the appointment, transfer and dismissal of various officials has been posted on social media, on 25th September, although no official statement has been released by the presidential office.

Mohamed Abdillahi Duale was appointed as the new Director General of the Ministry of Foreign Affairs, while former DG Abdirizak Jama Nakhude has been transferred to the ministry of Education.

Similarly, Mr Ahmed Abokor, former Director General of the Ministry of Education, was transferred to Ministry of Roads.

While Mubarak Abdillahi Daljir, the Director General of the Ministry of Defense, has been fired without replacement.