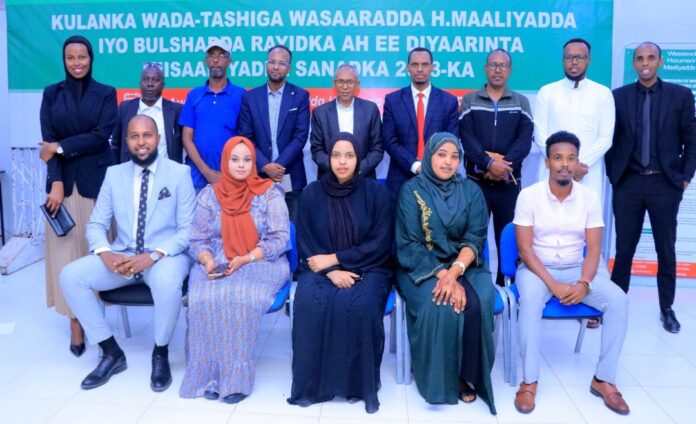 Finance Minister Dr. Saad Ali Shire said that the 2023 budget would focus largely on the areas of agricultural production, health, and education.

The meeting was attended by the Minister of Financial Development, Dr. Saad Ali Shire, Director General Mr. Mohamed Abdi Gurhan, and also the Directors of the Departments of Budget, Revenue of Customs and Land Revenue, Public Relations, Finance, and senior officials from the Ministry.

The director of the budget department, Mr. Yasin Duale Bare, gave a presentation on the government’s budget and the stages it goes through, which enlightened the community on the areas where the budget prioritized.

During the meeting, which lasted for many hours, ideas and proposals were exchanged and questions related to the previous budget and the preparation of the budget for the year 2023 were raised, all of which were answered by the senior officials of the Ministry of Financial Development

Director General Mohamed Abdi Gurhan, who made a speech, thanked the academics and the guests who attended have promised the public that their ideas will be reflected in the 2023 budget as much as possible.

Finance Minister Dr. Saad Ali Shire, who spoke at the event said that the budget is a management plan, and it is important for anyone who provides services to have a budget.

Dr. Saad said that the challenges of international trade have created a need for each country to plan its own well-being, and food has become a weapon to be used against each other, so it is necessary for the government and society to stop relying on the imported food and begin to grow our own food.

“We must get out of dependence on food grown by other countries, and turn to grow own food. In the year 2023, the budget will focus on Agriculture, Health and Education.

The meeting, which was held for the third year in a row, creates an environment for the community to have a say in the preparation of a budget.