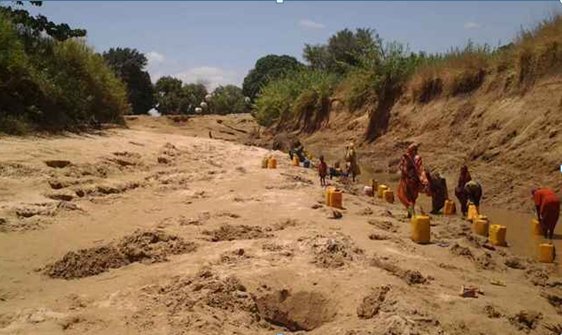 Hassan Mohamed, a farmer on the outskirts of Afgoyeinsouthern Somalia’s Lower Shabelle region, is counting huge losses for the fourth year running, after all the crops on his river-fed farm dried up due to lack of water.

Hassan, who depends heavily on farming for his livelihood, took hope in his hands and planted various vegetables including carrots, salads, and onions, investing a total of $2,000 in his two-hectare farm in Salad village.

But the hopes of Hassan and many other farmers in the area have been dashed because the river Shabelle has run dry yet again.

“My hope was to get as much as $3,000 profit after harvest. But after I was done planting, the level of river water started going down and then it gradually dried up. A few days later it started flowing again, but it was too little to reach many farms so our crops all dried up,” said Hassan.

The riverShabelle, one of the two perennial rivers in Somalia, has witnessed the drying up of some sections of the channel for four consecutive years. Thousands of families who depend on it for their livelihoods have been suffering as a result.

The first time it ran dry was in February and March 2016, followed the next year around the same time. With little rain in Somalia or in the Ethiopian highlands, the source of the river, some sections went dry again in December 2017 lasting until March 2018.

Since January, river levels have been dangerously low.

Another farmer, Arli Afrah Ali, planted a variety of vegetables on her six-hectare near Jowhar town in Middle Shabelle region. She says she had hoped to get a good harvest despite signs that the weather would be dry.

The river Shabelle is the longest river in Somalia and a major source of water for people in south and central Somalia.

Dr. Mohamed Hassan, an agricultural expert, believes that an improved early warning system and planning could help farmers avert the loss of their crops. He said the agencies working in agriculture and other organizations did not share the weather alerts effectively enough with the farmers on the ground.

“Sharing the information about drought and floods with the farmers is the best way, as that could at least improve planning. The only information people get is warnings about storms, which is intended to save the lives of the people,” he said.

Dr. Mohamed encouraged the farmers to construct their own water reservoirs for use during the dry seasons, as reliance on the river is risky.

Many families have been forced to flee their villages in the riverine areas due to drought and water shortage.

Failure by farmers to take preventive measures, such as building water reservoirs and heeding weather forecasts, has exacerbated the levels of crop failure.